A group of 18 cyclists took off this morning from Mammoth Mountain Ski Area’s Main Lodge. Included in the mix was MMSA Senior VP Bill Cockroft and his son Ryan. The group was headed for Manhattan Beach and planned to reach their destination in two and a half days.

The trip is a follow-up to a similar journey made four years ago by several of the cyclists among the group today. During that first trip three or four cyclists came from Manhattan Beach to Mammoth, a bit more of a feat considering the approximately 320 mile trip was mostly uphill and made a steady elevation gain instead of a descent.

“Perhaps next time we’ll go round trip, ride up and back,” said one of the original cyclists.

According to Cockroft, the group isn’t riding for a cause they are just a bunch of Mammoth fans out to have a good time. 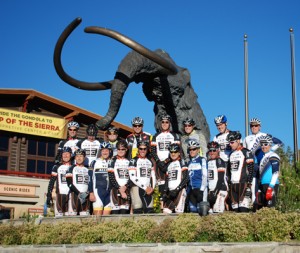 “We’re kind of like a fraternity on wheels,” said another cyclist, as the riders goaded and teased each other intensely in the background.

The group’s first stop was expected to be the Starbucks in Bishop for some morning grub. They planned to make it to Lone Pine this evening where they would spend the night. On Saturday they plan to make their way to Mojave and then on Sunday they finish the ride to Manhattan Beach and celebrate with a big barbecue.

The ride was organized by Dave Wehrly, who also participated. Cockroft’s wife, Sue was acting as the group’s sag wagon as was the large motorhome in the picture above. 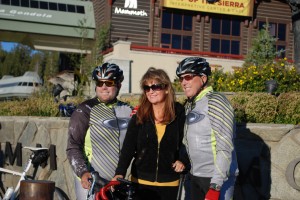 MMSA VP Bill Cockroft on the right and his son Ryan and wife Sue (Photo: Kirkner)