In what has proven to be a crazy election season, what could be crazier than having a competitive election for … Mammoth Lakes Fire Commissioner?

This year, two long-term commissioners, Richard Good (more than 15 years) and Richard Blanco (more than 14 years) are being challenged by Brent Peterson, 39, a Mono County Paramedic and former 13-year volunteer with the Mammoth Lakes Fire Department.

The challenge by Peterson appears to be motivated less by dissatisfaction with the current commissioners than it is by a desire to mix things up a bit.

“My motivation is to bring a different perspective [to the Board],” he said this week. “Currently, we have five commissioners who are involved on an administrative basis.” Due to the nature of his job, Peterson says, “I have direct contact with department personnel and operations … we work side-by-side on almost every call.”

The current commission, says Peterson, is too distanced from day-to-day operations. And is too comfortable with rubber-stamping whatever Fire Chief Brent Harper brings forward. “Some commissioners like to apply his ideas, but they’re not bringing their own,” he said. “They’re not challenging him [Harper] enough.” 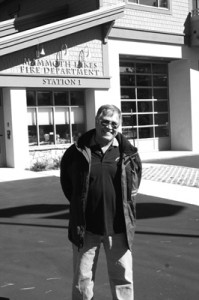 “I like this Board because we all get along. I could tell you horror stories about other fire districts,” he said.

Blanco, a retired captain of the L.A. County Fire Dept. (1966-1994), says each of the commissioners brings a degree of expertise from their field, citing Tony Colasardo’s business experience, fellow candidate Richard Good’s construction experience and his own firefighting experience.

Blanco acknowledges a close friendship with Chief Harper borne of their mutual background in fire service, but says this does not inhibit his decision-making and that “I don’t always agree with what the Chief wants.”

For example, Blanco said the Chief has recently expressed interest in purchasing a new fire engine because one of the existing engines is aging and incurring increasing maintenance costs. Because of budgetary constraints, Blanco said a new engine won’t be purchased at this time.

Fiscal responsibility, says Blanco, has been one of the hallmarks of the Board during his and Good’s tenure (Good was not interviewed for this story because he is out of the country volunteering on a Habitat for Humanity project. The “Richards,” however, appear to be running as a ticket, based upon the advertisement which appears on page 13). The new fire station on Main Street is being funded entirely out of district-designated property tax revenue – the note is scheduled to be paid off in 2024 – and even Peterson agreed that “the department’s generally doing a good job at being fiscally responsible.”

One of the biggest changes within the Fire Department in recent years has been the transition to a paid staff. In June 2008, Blanco said the department went from 4 to about 11 full-time employees (including the Chief).

Blanco believes the employees have been treated well, as well as can be expected in an area with such a high cost-of-living.

“The firefighter organization we have now,” he acknowledges, “probably feel like they want one of their guys on the Board. That’s their right. But Richard and I have been on the Board a long time and done a good job.”

How does Chief Harper feel about Peterson’s challenge. Publicly, his cards are being kept close to the vest.

“Those are my bosses. This is one thing I can’t comment upon. I work for whomever’s elected.”

Sheet: What do you think of the performance of the current Board?

Harper: We’ve gotten along well and done good work. My bosses have been a great bunch to work for.

Reading between the lines, one could take that as an endorsement of the status quo.

What does Peterson think of the Chief? “I get along with him,” he said. “but I don’t believe he’s endorsing me and he’s not excited about my candidacy. In my book, I don’t pose a specific threat to him – other than independent thinking.”

One other point of disagreement may be the Tasmanian Devil sticker on the new fire truck, which Peterson said cost thousands of dollars, but Harper elected to get because “he thought it was cool.”

Peterson said that if elected, he’d approach the job cautiously. “Initially, I’d have some stuff to learn, but once I’ve learned it, it’s on.”

“My fellow candidates have done a fine job supporting the community and department, but it’s time for a change to a younger, more embedded (within day-to-day operations) candidate,” concluded Peterson.