First chair of the 2010/11 season was the reward for this group that camped out overnight for the honor at MMSA’s Opening Day. (Photo: Kirkner)

Mammoth Mountain opened from head to toe on Thursday, with approximately 1-3 feet of natural and manmade snow, access to the Cornice Bowl, new park features and a brand new type of pass for individuals in the higher tax brackets.

The Mammoth Black Pass is a premium product that has been under development for several years, according to Senior Vice President at MMSA Pam Murphy. It was announced this summer.

“Basically we are bundling services that we already provide into a program that targets a specific group,” Murphy continued. “These are long-time community stakeholders and donors to Mammoth’s programs.”

The program caters to the guests who are used to elite services, but according to Murphy, are not “elitists.”

“They want to be part of the community,” she explained. “If people, including myself, want to pay more for firstclass services, that doesn’t mean I’m an elitist. It just means that convenience, access and service [the top priorities of the pass program] are important to me.”

A corporate Mammoth Black Pass, which is completely transferable, will run you $25,000.

One thousand dollars from each membership will go to the Mammoth Mountain Community Foundation. The remaining money will be used the same way money from a regular lift ticket is used, according to Murphy.

“The money goes toward operations and infrastructure, as well as local charities, ski programs and more” she explained. 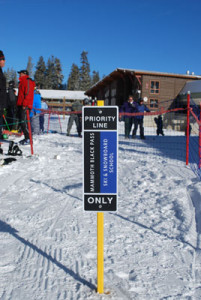 Being able to cut to the front of the lift line is just one of many perks of MMSA’s new Black Pass.

The pass price includes line cutting privileges (“You enter in the ski school line and go right to the front,” Murphy explained), a season pass for adults in demo, a personal concierge service to help organize your trip, a special dining area at Parallax in McCoy Station, and starting next year, a private locker room area.

What the pass does not include, Murphy clarified, is exclusive, closed-slope skiing.

“There is a misconception out there that we will allow early ups for Black Pass holders,” she said. “What we are offering is a special sunrise breakfast at McCoy on certain days of the season. This is included in the pass but is also an option available for public purchase.”

The activity allows guests early morning access to McCoy station for breakfast. After enjoying said breakfast participants will then be able to enjoy the slopes, just a few minutes early, and get first tracks down, according to Murphy.

“It’s not about early skiing, it’s more about the breakfast,” Murphy explained. “We’re not exclusively closed for any group. We are committed to great service for everyone.”

Murphy also clarified that the Mammoth Black Pass was not replacing the Mammoth Lakes Foundation’s Diamond Partner Program, which has been in existence for 19 years, even though the benefits of the new season pass are similar to those that were offered to Diamond Partners.

“The Diamond Partner Program was just a program to help the Mammoth Lakes Foundation get going,” she explained. “Mammoth Mountain Ski Area is still committed to the Foundation. We will still be donating season passes to MLF and promoting its events and activities.”

MLF Executive Director Evan Russell explained that the Diamond Partner program did go away with the advent of the Mammoth Black Pass and with it a signature source of revenue for MLF.

“But a number of people from the Diamond Partner Program will continue to support MLF in new ways,” Russell explained. “We are working on ideas now and already have some special events lined up for next summer.”

Mammoth Mountain opened with 12 trails accessing more than 2,000 vertical feet of rideable terrain including Cornice Bowl from the summit of Mammoth Mountain.

In addition to providing top-to-bottom skiing and boarding, Mammoth also debuted a variety of new features in its world-famous Unbound Terrain Park. Among the new offerings are a new urban stairset with three down options, a new brick urban planter box and a new concrete ledge. A selection of early-season jumps and other assorted rails and jibs are also available.

For a schedule of the Mountain’s opening weekend festivities for the 2010/11 season, see this week’s calendar section on pages 12 and 13.