Toppled trees led to property damage at this Val D’Iser condominium as well as a home on Holiday Way (see photo below). (Photos: Lunch)

You know it’s been a big storm when you can call yourself a world champion when it’s over. In the past week Mammoth has defied the odds and not only topped the charts for the snowiest December on record (155 inches with still more than one week to go!), but it also made headlines by having the most snow of any ski resort in the world.

On Tuesday, Dec. 20, www.skiinfo.com announced that with 488 centimeters of snow (or 16 feet) from this most recent storm, Mammoth topped ski resorts all around the world. The resort has reported 249 inches (20 feet, 9 inches) to date this season. This of course was no surprise to locals, who had been living in snowy darkness for four days.

The snowfall was heavy and wet until Monday when temperatures dropped and the accumulation became a lighter powder. This combination, however, had the Eastern Sierra Avalanche Center issuing warnings of high avalanche danger from Bishop Creek to June Lake while the National Weather Service reported gusts of 164 miles per hour at the top of Mammoth Mountain on Sunday. For reference, according to NWS, that’s equivalent to Category 5 hurricane force winds. Category 5 is the strongest ranking for a hurricane. Hurricanes Andrew and Katrina both had maximum sustained winds of 175 mph. 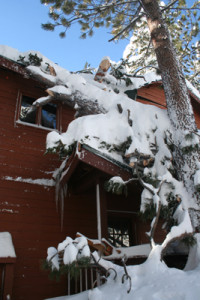 Between the wet, heavy snow stuck in their branches and the fierce winds, trees fell throughout town, wreaking havoc on homes, blocking roadways and tearing down power lines.

One such tree crashed into the living room of a unit at Val D’Iser Condominiums on Sunday, while another fell across Old Mammoth Road, blocking the roadway until emergency services could chop it up and move it away.

On Tuesday morning, Dan Brady, Public Affairs Officer for Southern California Edison, explained that there were approximately 400-500 people without power in the Mammoth area. This included the Post Office.

“Trees falling down or branches snapping off and tearing down the power lines are causing the problem,” Brady explained. “We have called in contract crews from out of the area [Ridgecrest and Twentynine Palms to name a few] and have 10 crews versus the usual two or three working in town now trying to get power back up.”

Storm warnings were issued, and then extended, and portions of U.S. 395 were closed at times.

On Tuesday the sun finally came out and people slowly climbed out of their igloo-shaped homes to run their errands, get on the hill … and then get ready for the new round of precipitation that was heading back in Tuesday night. Approximately one more foot of snow is expected on Mammoth Mountain by the end of Wednesday, with a break in the action on Thursday and Friday and a slight chance of snow on Christmas Day.