The California Department of Transportation (Caltrans) has been working very hard at clearing the large amounts of snow on Hwy 120 / Tioga Pass to the Yosemite National Park Gate. At this time, Caltrans District 9 workers have cleared a path to the gate and continue to clear the roadway and shoulders.

The gate at the bottom of Tioga Pass will remain closed until Yosemite National Park has cleared their portion of the Hwy 120. 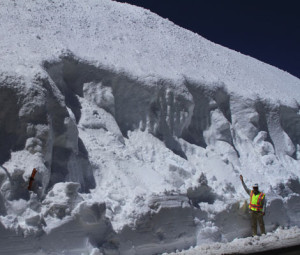 Massive amounts of snow have been cleared from Tioga Pass.

The California Department of Transportation (Caltrans) will have single lane closures on northbound and southbound U.S. 395 at Hwy 203 for extended periods of time, 24 hours per day, 7 days a week starting May 23 and likely running into September.

Crews of CC Meyers, Inc will be rehabilitating decks of the US 395/SR 203 Separation Bridge and Mammoth Creek Bridge and upgrading the bridge rails under a $1.9 million contract. The existing asphalt concrete surfacing will be removed from the decks of both bridges and treated with a polyester concrete overlay. The bridge railings and a portion of the existing bridges will be removed and replaced to provide 8” outside shoulders, 5’ median shoulders and reinforced concrete railings with an architectural treatment, to bring the railings up to current traffic safety standards.

Work will be completed in two stages: Stage 1 will close the #2 lane and outside shoulder and Stage 2 will close the #1 lane and the median shoulder. During certain operations, one way reversing traffic control with flaggers will be required on Hwy 203 at the Hwy 203 and US 395 separation causing up to 20 minute delays.

Other roadwork in Mono County

Beginning May 23 Caltrans and Sierra Nevada Construction will begin a shoulder widening operation on U.S. 395 1.5 miles north of Bridgeport.

Also on May 23, Caltrans and Sierra Nevada Construction will begin rehabilitating 10 miles of Route 270 beginning at the U.S. 395/270 intersection.