The new, modern-looking Mono County courthouse located along Hwy 203 in Mammoth Lakes may not have rustic, mountain appeal, but it is fully updated to 21st century standards. On Tuesday, the courthouse’s first day of operation, court was already in session in one of the new courtrooms, and locals were coming through checking out the new location.

The new complex was funded by the State’s Administrative Office of the Courts (AOC) after an evaluation of the old courtroom digs in Mammoth proved to be so run down, the project was bumped up on the state’s priority list.

The new courthouse occupies a 1.8-acre site at the intersection of Hwy 203 (aka Main St.) and Thompson Way. It replaces the aging, dated two-courtroom South County Branch Courthouse, located on the third floor of the Sierra Center Mall.

The estimated cost of the project was $21.5 million and was funded entirely by the AOC. 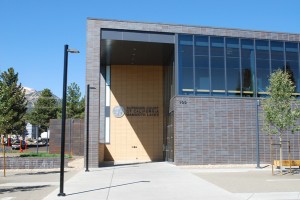 The doors are now open at the new courthouse in Mammoth. 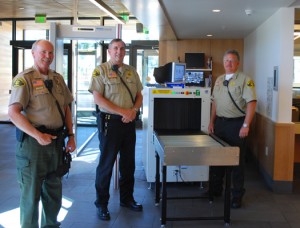