Attendees, such as Eric Smith, at this year’s annual Oktoberfest were full of smiles and beer. (Photos: Tiffany Henschel)

The 7th Annual Mammoth Lakes Oktoberfest, held at the Village at Mammoth, was full of beer, brats and beautiful women. Local restaurants were on-site featuring traditional Bavarian cuisine, and there were commemorative beer steins and stadium cups for sale. The two-day event kicked off Friday night, Sept. 23 with ROCKtoberfest! Adult competitions and games throughout the weekend included: Men’s and Women’s Stein Holding contest, Hot Dog Eating contest, Men’s and Women’s Keg Toss, and Corn Hole tournament. All contest participants received swag bags from the event’s sponsors and the winners received special prizes. The Kids’ Tent was hosted by “All About Kids’ this year and featured crafts and pumpkin decorating. 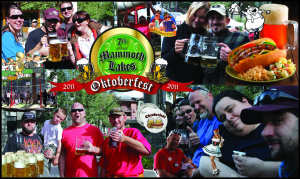