Mammoth residents Meb Keflezighi and Deena Kastor went to San Jose to rock, and the two Olympic medalists did just that, easily winning their respective divisions on Oct. 2 in the 2011 running of the Dodge San Jose Rock ‘n’ Roll Half Marathon, one of the Bay Area’s biggest road races.

Keflezighi, who is training for next month’s New York City Marathon, won the 13.1-mile race in 1:02:17, more than two minutes ahead of runner-up Giliat Ghebray, a Cal senior from Union City, who turned in a respectable 1:03:38. Sergio Reyes of Palmdale was third, coming it at 1:04:20.

Kastor only recently returned to running after giving birth to a daughter, but handily won the women’s division in 1:12:23. Clara Peterson of Larkspur was second to Kastor with a time of 1:15:23 while Cal graduate Brooke Wells of San Francisco was third in 1:16:15. “She’s made a lot of progress in a really short period of time,” Deena’s husband Andrew recently told The Sheet. “Everything’s coming along just fine and she’s pretty much back in business.”

Both Olympic medalists live and train in Mammoth, and are preparing for the U.S. Olympic trials Jan. 14 in Houston. 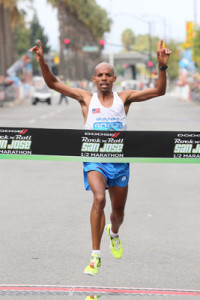 Keflezighi led a lead pack of five runners through an opening mile of 4:35. At mile 3 the 2004 Olympic Marathon silver medalist picked up the pace, running a series of sub-4:40 miles to open up a sizable lead on the rest of the field, one he held all the way to the finish line.

“It couldn’t have gone any better. A lot people were cheering, ‘Go Meb,’ and it was just awesome,” Keflezighi told Running Competitor. “My Mom is here and my brother lives here, a lot of the people are aware of what I have done and it’s nice to have the course coming back with the crowd.”

The event turned out to be a solid tune up for Keflezighi, who won the 2009 New York City Marathon–the first American do so in 27 years, and is preparing to finish at the front of the pack in the ING New York Marathon in November. “I run to win, which means challenge myself and don’t hold back. It was good today,” he added.

Equally impressive as Keflezighi’s victory was the comeback performance from Kastor, the only American woman to ever break 2:20 in the marathon.

“It was just awesome,” said Kastor, “San Jose really came out and showed their true colors today–the communities that we ran through, the neighborhoods everyone came out in their front yards cheering on all of us runners,” she told the San Jose Mercury News. “I felt good out there. It didn’t take too much out of me so it will be good to get back into training this week and use this as a stepping stone for the Olympic Trials in January.”

Runners from all 50 states and 14 countries participated in the race, including a group of California’s fastest runners, with no less than 10 athletes training to qualify for the Olympic Marathon Trials in January. Three-time Super Bowl Champion and race founder Roger Craig completed his sixth straight San Jose race, along with San Jose resident and soccer star Brandi Chastain. The sixth running of the half marathon was expected to attract 13,000 entrants.

This year, the race was being eyed as a proving ground on how the current crop of top U.S. runners would measure up against recent fierce competition from top runner from other countries.

Tracy Sundlun, co-founder of the Rock ‘n’ Roll racing series and a promoter and coach for 30 years, said a big factor is money. A $5,000 first-place prize, Sundlun said, does not “raise an eyebrow” in the United States, but runners from East Africa, for example, see that amount as significant and will throw themselves into the race to capture that kind of prize money.

Sports writers and analysts have lamented that the U.S. running elites might have fallen off the pace recently. But the top finishes Sunday by Kastor and Keflezighi are being viewed as indicators that U.S. distance competitors are back in top form and ready to rock in upcoming major races, including shots at Olympic medals next summer. – AG/Running Competitor/San Jose Mercury News