If you sterilize tools at 270 degrees for 15 minutes, they can have a wide variety of applications.

Just ask the doctors at Mammoth Hospital who went on a medical mission last month to Cintalapa, Mexico.

Dr. Andrew Bourne, who has participated in six such missions over the years, organized the trip.

If I’m forgetting anyone, please don’t kill me.

The Town of Cintalapa (pop. 64,000) is located in the State of Chiapas is Southern Mexico.

The conditions at the local hospital were rudimentary at best. As Dr. Bourne described, it does not have anesthesiology on a regular basis and is not a surgical hospital – except for the few times a year when visiting physicians arrive.

It stands to reason, therefore, that the hospital was also not replete with surgical tools.

With that in mind, Dr. Karch packed for just about every contingency he could think of before he left.

This included a trip to the Do-It Center for all manner of hardware, including a hammer, bolt-cutters, you name it.

He even grabbed a steel plate off his office shelf which had been previously used in a hip surgery in Mammoth.

It all came in handy.

The first day, Doctors Bourne, Karch and Kim conducted a four hour clinic and each saw about 100 patients to determine which ones they could treat.

As Bourne said, the toughest part of any trip is deciding which cases you can handle and which you can’t.

It’s not a zero-sum game. Spending time on one thing means you can’t take care of something else. Heroically trying to help one person can mean that five people don’t get seen at all. 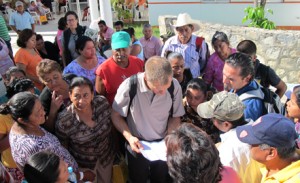 Dr. Andy Bourne outside the hospital.

As Bourne says, “Every pathology report I’ve ever seen down there says it’s a benign tumor.”

They’re not all benign.

“If you want to see what’ll happen without socialized medicine, go to Mexico,” says Bourne.

“It sure gives you an appreciation of medical care in the United States. At least you know you’re gonna be safe,” adds Dr. Kim.

Cintalapa was chosen because Bourne went to La Sierra College at Loma Linda with a woman named Elizabeth Romero, who is from this area of Mexico.

Romero wanted to bring a medical mission to her home state, so three years ago, Andy and his brother Jonathan went to San Cristobal de Las Casas as part of a bigger group brought together from several places. As the trip was a bit chaotic, Andy decided to create a smaller group which would be primarily from Mammoth.

As Bourne described, the political situation is always a little complicated. Every year, there’s a new wrinkle.

The wrinkle this year was that the Hospital Administrator wasn’t informed the Mammoth group was coming until they were already there.

You see, while Bourne’s group was sponsored by the County “President” and the local health department, hospitals are regulated by state as opposed to local authority.

The Hospital Administrator perceived the visiting delegation as a threat to her authority.

So you can imagine, the dialogue was right out of Joseph Heller’s Catch-22 when it came to negotiating for the use of an extra room to set up a mobile O.R.

Director: But what happens if we need the room for an emergency?

Director: But what about the equipment stored in the room?

Mission: We’ll help you move it out and move it back in.

The Administrator ultimately rejected the request. As Bourne said, “The hardest translation [linguistically and culturally] is always with the local political people, not the patients.”

But back to those tools.

One of the last patients to come in that first day was a man who’d fallen off a ladder three years previous and broken his femur.

He hadn’t had the money to fix his leg, so he’d been hobbling around on a walker ever since, one leg eight-and-a-half inches longer than the other because the bones were overriding each other.

That first night, Karch and a team which included Escudero (his wife), Dease and Boyer operated on the man between the hours of 10:30 p.m. and 5 a.m. Karch made a 24” incision, was able to pull out the bone and lengthen the leg by almost 7”, and then flipped the hip plate upside down and cut the curve out of it with his bolt cutters and used it to stabilize the reassembled femur.

Interestingly, that same night, about 4 a.m., a woman came into the hospital who was in labor. She was having a vaginal breach – the baby was coming out wrong end first and one leg had already presented outside the vagina.

In the States, an ultrasound would have alerted doctors to what was going on long before and a C-Section would have been performed.

In this case, this was the first time the woman had seen any doctor during her pregnancy.

Karch said Dr. Mark Hardesty (another Bourne connection from college) helped deliver the child, but by the time it was out, it was a shade of blue from lack of oxygen.

Escudero stepped in to perform CPR and intubated the child (put a tube down its throat to facilitate breathing) to save its life.

As Karch admitted, “I’ve been married 15 years and I’ve never seen what she does in a high-pressure trauma situation.

Needless to say, he was impressed.

One more story: While I’m sitting down for the initial interview with Bourne, he casually mentioned that Karch had had to go across the street at one point to a hardware store to buy a hacksaw so he could perform an amputation.

As Karch said, “That’s the way amputations have been done for hundreds of years. I wouldn’t have done it if I thought there would be increased risk, but with the proper sterilization … it just takes a lot more elbow grease.”

As they say, necessity is the mother of invention. And some folks are quite resourceful.

As Bourne joked, “He [Karch[] was like a Boy Scout at a Boy Scout Jamboree.” So when I spoke to Karch later, I casually asked him if he’d ever been a Scout.

Not only had he been a Scout, he’d achieved a number of awards, among them a Life Scout designation.

Thanks to local doctors, support staff and volunteers for making it a Merry Christmas for many in Mexico this year.