Sarah Burke in 2006 at the Orage Masters during Mammoth Mountain’s annual West Coast Invitational Spring Time event. Burke was known to train and ski in the halfpipes and parks at Mammoth and June mountains throughout the years. (Photos: Janewicz-Leggette)

Canadian freestyle skier Sarah Burke died Thursday, Jan. 19, nine days after crashing at the bottom of the superpipe during a training run in Utah.

Tests revealed Burke sustained “irreversible damage to her brain due to lack of oxygen and blood after cardiac arrest,” according to a statement released by Burke’s publicist, Nicole Wool. As a result of her fall, Burke tore her vertebral artery, which led to severe bleeding on the brain, causing her to go into cardiac arrest on the scene, where CPR was performed, Wool said.

Burke’s organs and tissues were donated per her wishes.

“The family expresses their heartfelt gratitude for the international outpouring of support they have received from all the people Sarah touched,” the statement said.

The heartbreaking news has left a saddened tear in the world of action sports.

There are not too many models or movie stars that have graced the pages of popular magazines and walked red carpets gracefully in their stiletto high heels who can also claim freeskiing halfpipe tricks such as the 1080 (2007 World Skiing Invitational in Canada), back-to-back flairs (2011 Winter X Games) or even the Flat Spin Alley-Opp 540 (2011 Winter X Europe). Burke could lay claim to both.

Just as respected U.S. Olympic halfpipe snowboarders such as Kelly Clark, Gretchen Bleiler and 2010 Gold Medalist Torah Bright have set new standards for women’s snowboarding in the halfpipe for their amplitude, talent and style, so did Burke for women’s freestyle skiing.

In July 2011, as a nominee for an ESPY award for Best Female Action Sports Athlete (which she had previously won in 2007), Burke was also pampered “Hollywood” style as she posed in a photo shoot for ESPN The Magazine’s annual “Revenge of the Jocks” issue alongside NBA star Amar’e Stoudemire and NFL RB Marshawn Lynch.  Although the word “Jock” probably does not describe such a champion known for her charming personality and smile, Burke, who wed fellow professional freestyle skier Rory Bushfield in 2010, was the driving force, voice and advocate behind the charge to allow women’s skiing in the Superpipe for the Winter X Games, and most recently for the upcoming debut of the Ski Halfpipe at the 2014 Olympic Games in Sochi, Russia. 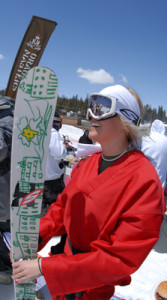 On Tuesday, Jan. 10, it was reported that the 29-year-old Burke was seriously injured while training for the upcoming Winter X Games at the 22-foot Eagle Superpipe in Park City, Utah. According to the Associated Press, a day after the accident, doctors said they repaired a tear to an artery that caused

bleeding on her brain. The reports said she tore a vertebral artery, which is located in the neck and supplies blood to the brainstem and the back part of the brain. Those parts control many critical functions, including balance and vision.

On Monday, Jan. 16, Burke’s family canceled a press conference that was meant to update the public on her condition, stating that more tests needed to be done.

As a past three-time Winter X Game snowboard athlete and a former ESPN snowboard expert, hearing such terrible and unfortunate news was tragic, especially when rumors of “how she fell” began to circulate within some reports.  In my understanding, it was a trick she landed and in the blink of an eye she was down.

“Catching an edge” or “losing balance” after landing a trick in the flat bottom of a halfpipe is a common occurrence for snowboard and ski competitors where a broken nose, a broken wrist, or just some broken pride might be the outcome. Burke, however, was not so lucky, and today her family, friends and Sarah need your prayers.

Before the news broke of Burke’s death, Nicole Dreon, a long time Winter X Game Ski Research Expert and Lake Tahoe local stated, “Sarah pushes the level of women’s skiing at Winter X every year, and she definitely brings an unprecedented excitement to the sport.  But more than that, she is known for who she is off the hill — a warm, humble and incredibly approachable person, who connects with fans, fellow competitors and everyone who meets her.”

Mammoth Unbound snowboard team rider Kimmy Fasani had also commented, “Sarah is a pioneer for skiing and she has paved the way for so many of us with her dedication and commitment to progression and speaking out for women’s equality. Sarah is always smiling, positive and happy. She is a woman of strength.”

Visit www.giveforward.com/sarahburke to donate to Burke’s memory. The fund will be used for Burke’s outstanding medical costs and related expenses.