By Alana Levin and Karen Small

All skiers competed in a classic race and due to snow conditions, the klister was flying, sticking and working all day long.

Mammoth High School’s team, coached by Alana Levin, continued its top-10 finishing streak. Leading the girls’ pack, Amanda Kirkeby won the open division (and ranked 6th fastest finishing time in the Varsity division). Kirkeby led with more than a minute over the next open competitor. Jody Meads, skiing for only her second year in Nordic skiing, finished 3rd over the field of 34 girls, while Kylie LaFramboise came in close at 6th place chased by Katherine Janisse in 7th place.

Freshman Carson Bold led the Mammoth open boys in 4th place over the field of 26 athletes. He was followed in succession by Jack Roten, Philip Oxford and Nick Damico, who finished 5th, 6th and 7th respectively.

The Mammoth Middle School girl’s team skied a strong 3km race, with all their athletes finishing in the top third of the large field of 71 racers. Fleur Connolly lead the way for Mammoth in 14th place, followed closely by Lindsey Pietsch-Roberts in 18th and first year racer Meaghan Thompson in 21st place. Coach Robin Morning and Marie French could not have been more proud of all their Nordic athletes who took part in the Mammoth Classic.

Junior Far West team athletes stayed in Mammoth over the weekend to prepare for Sunday’s Allan Bard Classic, one of four Junior National Qualifying races (only three this season due to snow conditions) for the Far West region.

Each athlete must qualify in both a classic and skate race to be selected to compete in Junior Nationals. On Sunday, Feb. 5, five Mammoth athletes took the challenge.

Amanda Kirkeby skied with determination in the 5k to qualify for Junior Nationals in the classic eligibility portion. Carson Bold finished close, only 3 percent outside of the qualifying time. Philip Oxford, Nick Damico and Jack Roten (10k) raced for boys and skied well, just outside reach of the qualifying times. 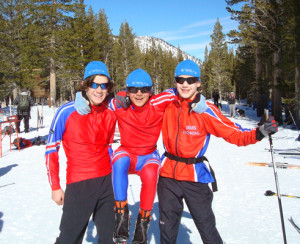 State Championships for Nordic will be held Saturday, Feb. 18 and the last Junior National Qualifier is set for President’s Day, Monday, Feb. 20, at Auburn Ski Club.

For full race results for both races, visit: http://farwestnordic.org/fwnsea/