Jill Kinmont Boothe, an Eastern Sierra icon, passed away on Feb. 9. She was a week shy of her 76th birthday.

A national ski champion who had a Sports Illustrated cover on her resume, Jill’s career was cut short by a ski accident in the winter of 1955 which left her a quadriplegic, Kinmont Boothe rose above her physical limitations to become an accomplished schoolteacher and artist.

As husband John Boothe,  who married Jill in 1976, said this week, “I never thought of her as a disabled person … I didn’t look at it that way. She came off as normal in a minute.”

The couple met in 1973. At the time, John, born and raised in Bishop, was working as a truckdriver (he retired about five years ago) and Jill was spending the summer in Bishop teaching on the Paiute reservation.

As fate would have it, they lived right next door to each other that summer. When she returned to teach in the Los Angeles area that fall, John said he arranged his schedule so he could spend weekends with her in Pacific Palisades. 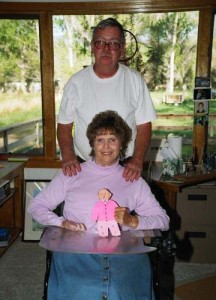 Kinmont Boothe and her husband, John.

A movie based upon Jill’s life, “The Other Side of the Mountain,” came out around that time. The movie was based upon a 1966 book written by E.G. Valens called “A Long Way Up.”

As John recalls, the Boothes had to temporarily unlist their number after the movie came out because of all the phone calls.

“It slowed down after four or five years,” he said.

As the book lays out in fairly vivid detail, Jill encountered more than her share of life loss and disappointment.

The two loves of her youth, skiers Dick “Mad Dog” Buek and Buddy Werner, died in a plane crash and avalanche respectively before either had reached the age of 30.

The person who inspired her passion for academics at UCLA, Lee Zadroga, succumbed to complications stemming from polio just a few years after she met him.

But before he died, Zadroga wrote the following in a recommendation letter to UCLA in support of renewal of Jill’s academic scholarship:

“During a brief but remarkably successful athletic career Jill Kinmont won a fine reputation as the best kind of competitor. Her conduct since an accident ended that career, the courage and persistence with which she has overcome tremendous obstacles, has made her one of the most admired figures in international sports. The qualities of character and ability which have gained for her this reputation are equally manifested in her career as an aspiring teacher.”

And that career was no gimme. This was in the era before handicap-access. She was rejected for jobs time and again because she was wheelchair-bound and could not climb stairs.

Ultimately, Jill and her parents moved to Seattle, Washington, where she obtained her teaching credential and then a first job as a remedial reading teacher at Mercer Island school.

She ultimately taught in the Bishop elementary schools from 1975-1996. 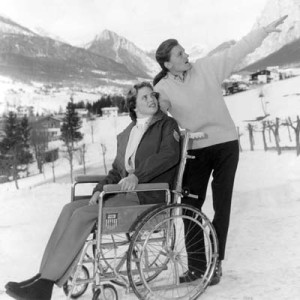 Jill and Andrea Mead Lawrence at the 1956 Olympic Games in Cortina d’Ampezzo, Italy.

When asked Thursday if Jill was the best skier he ever coached. Dave McCoy said, “I don’t think you should say things like that. She worked like crazy to make herself better. She didn’t want to beat anyone else particularly. She just wanted to better herself. She was that kind of person – every day she had to do better. And she helped other people be what they wanted to be.”

John Boothe talked about one student from her Beverly Hills days who wrote years later and said he’d been put in her class to “catch up.” He just wanted her to know that he had indeed caught up – and passed the Bar Exam.

“The world gets screwed up going after yesterdays,” said McCoy. “It’s about now.” And Jill Kinmont Boothe was always about now. Her younger brother Jerry said Thursday that she was “always optimistic to the end.”

A memorial service for Jill will be held at 11 a.m. Saturday at the Masonic cemetery near Bishop Airport on East Line Street. A reception will follow in the Home Ec. Building at the Tri-County Fairgrounds. Donations in Jill’s memory can be made to the Jill Kinmont Indian Education Fund, 310 Sunland Drive, Bishop, Calif. 93514. 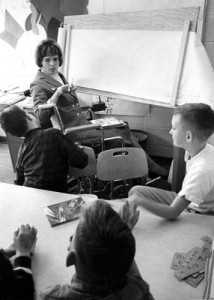 Jill in a Bishop classroom.