The MHS Girls Soccer Team ended the season with a hokey-pokey of a loss. Pictured: Jenni Ayala and Jojo Hernandez of MHS. (Photos: Lunch)

With its loss to Oxnard on Feb. 15, the Mammoth High School Girls Soccer Team is out of the playoffs and their season is finished.

The game was played in Mammoth, and #11 Sandy Grimaldo, scored Mammoth’s only two goals of the game.

“We had glimmers of hope with connecting passes, but it was too little too late,” said Cage, who played 19 girls throughout the game in an effort to find the right combination to combat the speed and accuracy of Oxnard. 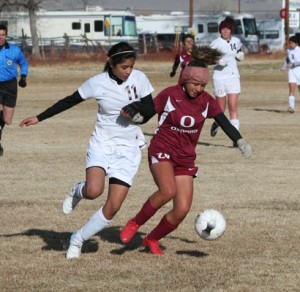 #11 Sandy Grimaldo, scored Mammoth’s only two goals of the game

Cage did point out that the game against Oxnard was extremely clean. “There was not one yellow card and only three indirect kicks were allowed,” he said.

Cage thanked all the parents that helped out this season, and his assistant Meghan Bair. He also thanked Shana Stapp for her fundraising efforts.