How has Hal Clifford’s treatise on the corporate ski industry held up to the test of time?

“Skiing is not simply dying; skiing is being killed.” It’s been 10 years since author Hal Clifford wrote that line in his 2002 book, “Downhill Slide,” the controversial and at times scathing critique of the corporate ski industry. Clifford laid out a meticulous case as to why a highly developed form of international tourism had become “bad for skiing, ski towns and the environment.”

Was he right? Is death inevitable, or are rumors of its impending demise greatly exaggerated? Clifford’s book was taken as a forecast of sorts at the time, illustrating patterns that had been forming during the decades leading up to the book, and preparing the reader for what he thought were the shapes of things to come. Today, part of it does read like a history book, showing those of us who choose to recreate in the “new world order” of corporate ski areas how we got here.

Looking back, Clifford thinks his prognostication was pretty accurate. “The demographic realities around the ski industry have been inexorable, and the sport is increasingly a hobby of the 1% in the major ski areas,” Clifford said. “I recently did a back-of-the-envelope calculation and realized it would cost someone about $3,000 to buy decent off-the-rack skis, boots and bindings. And that’s just the beginning. To my eye, nothing’s really changed in the trajectory of the industry.”

In the book, he detailed skiing’s modest, practical beginnings and how those morphed into sport and recreation, which began to accelerate after WWII. As ski areas emerged, demand increased, and the ski bum town, and its “gypsies who held part-time jobs to follow the snow” lifestyle began to give way to major real estate investment and more affluent clientele.

Was the demise of the small ski area and the ski bum lifestyle somewhat inevitable, given the upturn in skiing that was sparked after WWII? 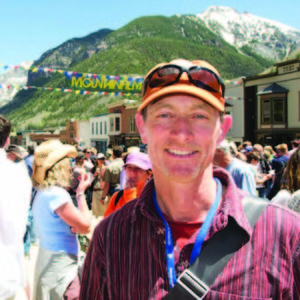 Clifford in Telluride for the 2010 Mountainfilm Festival premier of his documentary “Stone River.” (Photo: Take One Creative)

“Probably. As I noted in the book, we have an American tendency to take something charming and original and commodify it (i.e. Jimmy Buffet’s Margaritaville, the Hard Rock Cafe, Santa Fe style … you get the idea),” Clifford observed. Ski culture was similar to surf culture, he noted, though he added there have been many more geographic opportunities to commercialize skiing.

“This isn’t necessarily an entirely bad thing … the only way to preserve something is to put it in amber, and who wants to live in that?” he said.

Mammoth Mountain Ski Area CEO Rusty Gregory keeps a copy of the book in his office. Gregory said in retrospect he admires Clifford as a writer, and thinks he got some things right and a few things wrong 10 years ago.

“He really nailed the characterization of die-hard skiers and idiosyncratic towns that are part of ski areas. Mammoth is certainly emblematic of one of those towns,” Gregory stated. “But I disagree with his thesis that skiing was going to remain unchanged and also that it was going to ‘snap back’ to its hardcore skiing origins. Almost as if we need to take over the means of production and return it to the proletariat, back to the hardcore skiers.”

Gregory pointed to the growth of the ski industry, which logged 60 million skier days in the U.S. alone last year. “It grew when other activities were shrinking. Intrinsic appeal of the sport in the form ski resorts offered was attractive. People went more often and got enthused and were willing to pay higher prices.”

On economics, he also took issue with Clifford’s assertion that capital seeking profit was inconsistent with profitability. “The facts don’t support that,” Gregory opined. “It’s agnostic … it doesn’t have a face. He tried to put an emotion and ‘character’ to capital, which I don’t think is accurate.

“Capital’s required to do anything, and it has to make a profit. Capitalism is what enables innovators. Steve Jobs was able to sustain innovation, but loved the space he was in, and made enough money to plow back into other great ideas. Same with the ski industry. Ski makers looked to customers and gave them new ways to ride. Jake Burton brought on snowboarding as well. Is he one of the radicals or a capital innovator? He’s probably both.”

Meanwhile, Clifford thinks today’s ski industry has become a vehicle by which mountain towns are building out, becoming more a part of the American mainstream. “A drive up the Roaring Fork Valley in Colorado is starting to look like a drive through other parts of America,” he said. “What’s problematic is how there is still so much boom and bust associated with the real estate side of the industry. And while economic development is a fine thing, it needs a more stable foundation than what the ski industry real estate boom has provided.”

Real estate, Gregory commented, is still a component, but subject to booms and bust, even though ski resorts themselves have flourished. “He was right about it in that it’s a one time liquidation type of commodity … you buy it, you build on it, you sell it and it’s gone, and you can use the ski area as a loss leader for real estate. Real estate isn’t a bad business, but it’s risky and volatile …  he was right about that, too. It was true 10 years ago and it’s true now, and probably true before he wrote the book. You should do it in a smart, portfolio way, and timing has to be accurate, and you’d better have enough money put away for a rainy day.”

In addition to littering Wall Street stock trading floors with buy and sell tickets, Clifford pitched in “Downhill Slide” that ski area expansion was dangerous to the environment. Wildlife was being pushed out from what were natural habitats and subsequently mistreated. Fishing, he indicated, was negatively impacted, and ski area expansion put a strain on power and water, and increased carbon footprints.

Measures put in place since, either through government mandates or green trending, have attempted to mitigate some of those issues. Mammoth Mountain Ski Area, for example, has implemented an extensive recycling program and runs much of its vehicle fleet on cleaner-burning biodiesel, among other measures.

And a decade later, it seems the era of the independently-owned ski area isn’t over, at least not yet, with Arapahoe Basin and Loveland in Colorado, Jackson Hole in Wyoming and Wolf Laurel in North Carolina still in operation.

Gregory noted that indie ski areas are great, and there’s certainly a place for them in the market, but at the end of the day, all ski areas share the same profit-loss model, whether it’s corporate capital or private money that drives the bottom line. “It’s all about running the lifts and selling tickets. You hope for good snow years, and you sell more tickets during peak times than you do during midweek. It’s the same everywhere.”

Clifford, who has since added the role of filmmaker to his resume, remains more pessimistic on his view of the industry’s future. “There are possibilities for community-ownership, cooperatives and similar business models to get a toe-hold and hang on. They can make a living in the uphill transport business, and you still see lots of small ski areas doing so,” he said. “But it’s not easy, and with the challenges posed by climate change, demographics and [economics], it’s not a business I’d want to get into, or one I’d recommend for my kids.”