On Monday, April 30, just shy of 40 years of service, Mammoth Lakes Fire Department’s Division Chief of Training and Safety Bill Anderson took one for the team and retired.

Not immune to the bad economy, the Mammoth Lakes Fire Protection District has been experiencing some financial issues and looking to make changes. Anderson chose to step up to the plate and retire early so that others on the department wouldn’t have to suffer.

“I just turned 65, and I had wanted to retire in three years anyway so I volunteered to take a severance package,” Anderson explained.

Anderson first joined MLFD with his brother Tom in 1973 as a volunteer, but his ties to Mammoth go back even further.

“I worked at Mammoth Mountain Ski Area in 1967 as a seasonal employee,” he remembered.

Then it was off to Vietnam and college for a while. He returned to Mammoth in 1971 and went back to work for MMSA year-round where he remained until 2005 when he took the full-time Division Chief position with MLFD.

“I just loved it,” he said of the reason behind his dedication to the department over the years. “And my family was great about putting up with it.” He described many a night when dinner was just about to be placed on the table, the kids, Scotty and Shelby would be a handful and suddenly the pager would go off and he would have to leave his wife, Val in the midst of it all.

MMSA was also very supportive of the fire department and would let him go on calls, he added.

The scariest memory he can recall while on the department was being on a structure fire (he doesn’t recall precisely which one) where the smoke was to the floor. 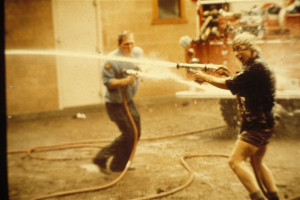 Goofing around in the old days (Anderson on right).

“I remember crawling on the floor thinking, ‘where am I’, and ‘do I want to be here?’”

But he remembers that the training he had been given prepared him and made him comfortable in situations such as these, which is why he was extremely proud of his Division Chief position.

“I’ll miss the trainings and teaching the rookie class,” Anderson said. “The training always made me comfortable and I like to think it’s the same now. I have to thank the guys and gals that show up to those Thursday night trainings. We have to be ready for the few fires that we get so we train, train, train as realistically as we can. I am mostly going to miss all of these very committed people.”

The department will not be refilling Anderson’s position in order to save the salary. Instead, Captains Robert Williams and Natalie Morrow will fill in the gaps. Ales Tomaier and Dusty Renner will also pitch in, as will the remaining Fire Marshal Thom Heller and Operations Chief Bob Rooks, Anderson said. 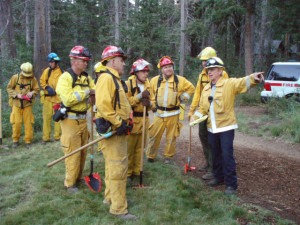 “We’re going to miss Billy a lot,” said MLFD Fire Chief Brent Harper. “He’s been a great help to me and the whole department. He really loved the department and the people.”

Harper is the third Fire Chief that Anderson worked for. He came on under Jon Sweeny in 1973 and then served under Chief Harold Ritter when Sweeny retired in 1992. Anderson credits Sweeny with getting MLFD going, Ritter with getting the new station on Main Street built, and Harper with turning the corner in bringing full-time paid staff to the department.

Anderson’s last day was Monday and a retirement party was held in his honor on Thursday night. Friday morning he and Val took off for their trailer in Encinitas where they plan to spend the summer. They’ll return to Mammoth for the winters and Anderson plans to work part-time for MMSA as a ski and snowboard instructor.

“I love Mammoth and won’t ever leave for good,” he said. Anderson also plans to return for the annual Fireman’s Picnic and Canoe Races the last weekend in July to celebrate his retirement with two colleagues who have Mammoth ties and also retired this year.