Freddy Cecena is a neat kid. Of course, I could say the same thing about every other ninth-grader in my second period World Geography Class, and you’d be wasting your time trying to prove me wrong. I love teaching that class at Mammoth High School.

Every weekday morning at 8:45 a.m., 25 young souls stroll into the classroom with the expectation to engage in a meaningful discussion of global learning which could include anything from the comparison of the European exploration of Kenya in the 1400s to that of the 1800s, to a look at the difference of definition of dialect to the meaning of language, to peeling off every layer of the onion of the human cultures which compose Southeast Asia.

It’s my intention for that class to produce global travelers, to give them the taste of international adventure which sank deep in my soul several moons back. So far, I think Freddy is eating it up. He was stoked to learn that a bowl of pork and vegetable soup only costs 20 cents in Hanoi.

These last two weeks, we have moved along from analyzing the lives of the Hmong people living in the Vietnamese highlands, to inspect a country which I have great personal experience with: Italy. “Non si scherza del cibo nel’italia.” What’s that translate to in English? I’ll give you a hint, as I’ve joked with Lorenza Walker, one of the only other Italian-speakers in town, quite often, “Non si scherza della neve a mammoth.” ”Cibo” translates to “food” in English, as “neve” means “snow.”

“Mammoth,” by the way, is intentionally not capitalized because location names don’t take capital letters in Italian. In any event, as we cut through this free-of-charge Italian lesson, you can likely guess towards what I am alluding to, as did everyone one of those scholars correctly did on the quiz last Monday, that, “One doesn’t joke about food in Italy.” And, “One doesn’t joke about snow in Mammoth.” It’s fun stuff, that Geography class.

So, here we are, in Classroom #9, deep in the muddy trenches of Mammoth High, and Freddy and friends are learning about the global impact which the Italian Civilization had on the world during: 1. The Ancient Roman Empire. 2. The Renaissance Period. And, 3: Contemporary Times. After the lesson, right before the end-of-period-bell, he picks up on the announcement made to class that I would take any one of them fly fishing after school if desired.

Two weeks back, we returned to school from Spring Break. Along with the excitement of another glorious round of STAR tests, graduation talk for the Senior Class, and the sweet taste of summer freedom lingering right around the corner, all of these kids heard directly from their teacher that any and all of them were invited to come along for an after-school experience of fly fishing. Yep, fly fishing. It is a far cry from a lesson about Scotland, although we owe it to the Scots for inventing the pastime of fly fishing.

The news of this extracurricular activity rang a bell with seven of my students. They were ready for me after school.

So, eight of us loaded into a school district van on a Thursday, and headed down to Hot Creek for a two-hour unofficial science lesson. I call it a “science lesson” because when I approached the the school administration with the idea for a Fly Fishing Club, I buried his hesitation towards starting it up with the truth that the kids were learning more about nature than just hooking trout. That it was, as it is, after all, a lesson in hydraulics, ichthyology, insects, biology, climate changes, etc. and so on. 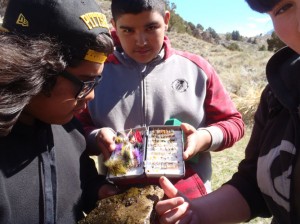 Unofficial science lesson: checking the underside of rocks to “match the hatch.”

Freddy, like his six other counterparts, naturally assumed that they were off only to catch trout. Little did they know that they would also be looking under river rocks for bugs in their nymph stage of life, witnessing sparrows feeding off Caddis, and learning of the physics of fly rod casting. Subliminal instruction, we shall call it.

Creekside, I tied a size-16 Beadhead Scud on the rod which Carlos was busily casting. He hooked a trout. He didn’t land it, but he hooked it nonetheless. First time ever. Jacob Port? That kid crushed it. First day ever fly fishing, and he landed both a rainbow and a brown. Size-16 Flashback Pheasant Tail. Good job, Jacob. And then, there is Freddy. On the end of his rod was a size-22 BWO.

Freddy was standing on the shoulder of the creek, his smile bigger than the Eastern Sierra, casting with every hope of landing Moby Dick. Suddenly, from 50 yards away, I hear the breaking of silence with an electrifying scream, “Mr. Leonard! I have a fish!” It’s possible the trout in Twin Lakes heard his scream. It was that loud. I came running up with net in hand, past the other boys, ready to help the scholar of World Geography land his first trout. And, with less than 10 paces to be by his side, I hear the second scream, “Duh-oh!,” that Homer Simpson cry we’ve all heard at Hot Creek. It means, “It … spit … the … hook.” I felt like Freddy’s whole world came crashing apart. But, he looked up at me with a grin twice as big as the one on it moments before. He didn’t catch another trout that day. He was so close.

Friday, the day after … the 8:45 a.m. bell rings. Freddy gets out his notebook as he prepares to engage in a conversation about the regionalism of Italy. But, before I can mention a word, he asks me, “Mr. Leonard, when are we going fishing again?” I responded with a question, “You want to get that trout, don’t you; it’s personal now?” His predictable response: “Yep.” And with a smile, the conversation turned back towards Europe.

The Mammoth High School Fly Fishing Association is at it again, one trout at a time. Tight lines, Freddy. By the way, your homework assignment is to translate into English for me the line, “Non si scherza di pescare a hot creek.”

A more detailed report can be found at http://kittredgesports.com/fishing_report.php. Leonard guides for Kittredge Sports. Call 760.934.7566.