Droughts can often change the course of history; even someone’s personal history.

In 2004, Ron got his mitts on his first digital camera, and was sucked into a brand new passion — outdoor photography.

His favorite subjects from 2004 through 2006 were butterflies. Then, in 2007, the Eastern Sierra experienced a drought.

“And there were no butterflies,” Oriti explained.

Frustrated without his favorite muse, Oriti wasn’t sure what to do until his wife suggested he try to photograph dragonflies.

“I didn’t think I could do it because I thought they moved too much,” Oriti said. But, as is often the case in many a marital relationship, his wife was right.

Oriti has captured somewhere around 50 species of dragonfly with his SLR (single lens reflex) camera, including a Striped Saddlebag dragonfly, which is a species that isn’t suppose to reside in the Eastern Sierra. Barbara spotted it with her eagle eyes and “really shook up the whole dragonfly world,” Oriti said.

On Tuesday, May 29, Oriti spoke at the Green Church on Benton Crossing Road as the fourth lecturer in the annual SNARL (Sierra Nevada Aquatic Research Laboratory) spring lecture series. 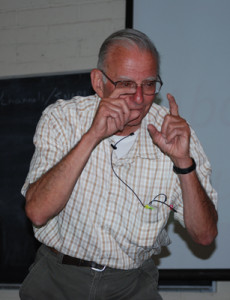 With an Italian background, Oriti couldn’t help but use his hands during his lecture. Here he demonstrates how to sneak up on and photograph a dragonfly. (Photo: Kirkner)

Admittedly not a trained biologist, Oriti explained what he knew of the dragonfly’s biology and honestly acknowledged what he didn’t.

Some of the interesting points he did divine included the fact that dragonflies chew their food and love to dine on mosquitoes. So if you have a pest problem at your home, see if you can get some dragonflies over for a visit, but beware, they will also eat almost any other insect, including each other.

A little dragonfly sex education: the male genitalia are located in its thorax. The male grabs the female just behind the head with the end of its abdomen. The female then curves her body up to the male’s thorax and genitalia, forming a wheel, and the two mate. Females then lay their eggs in the water.

“If you love dragonflies, the Eastern Sierra is a good place to be,” he said.

In addition to a little biology lesson on dragonflies, Oriti also provided helpful tips on how to photograph the creatures and shared his own stunning imagery.

“You have to learn by experience what works best,” he said. “But film is cheap in a digital camera, so just keep shooting.”

One tip: if you do scare off the dragonfly you’d like to photograph, just back up and wait. According to Oriti, they like to come back to the same spot.

Common Green Darners just after mating. The female is laying her eggs in the water. (Photo: Ron Oriti)

As has been the case in the past, Mother Nature is having an impact on Oriti’s subjects. So far he’s seeing fewer dragonflies this year, which he said he could only assume was due to the weather. Luckily, this time around he has a back up and has also been photographing lizards.

The next SNARL lecture is scheduled for June 5 at 7 p.m. at the Green Church. The topic will be “Bats in Peril” presented by Dr. Patricia Berry-Brown, Dept. of Physiological Sciences, UCLA, retired.

New this year is the ability to view lectures on the web. Simply visit vimeo.com and subscribe to the “SNARL” channel.