Story and photos by: Rebecca Garrett

I’m guessing that you could hear a pin drop in those seconds two years ago right after Jeremy McGhee said, “I want to do that!”

That was his reaction to the stories his friends recounted of their fresh conquest of Bloody Mountain and the afternoon they spent skiing down Bloody Couloir.

From the French word meaning “passage” or “corridor,” a couloir is a narrow gully with a steep gradient in mountainous terrain. And by any standard, Bloody (as it’s called) is a serious backcountry couloir. What makes McGhee’s desire to climb and then ski Bloody unique is that he is a paraplegic. Jeremy was hit by a car when he was out running errands on his motorcycle in 2001. The accident left him without the use of his legs.

After those seconds of silence there would have been hoots and hollers, and a few shouts of “Hell, yeah!” And so it began, a two-year journey that would culminate over two days in June this year, when McGhee would pull himself up Bloody Couloir, have a PB&J sandwich on the summit with his friends, sign the register and then ski down.

Friday, June 1: Mission objective: get Jeremy, all the expedition gear and the Drop-In Crew to base camp and get set up before dark. We all met at Jeremy’s place at The Chutes which Mammoth Mountain Ski Area had donated for the duration of his training. Gear poured out of cars. Ropes, crampons, ice axes, backpacks, sleeping bags, etc., were repacked into a handful of trucks with the high clearance necessary for the drive in.

We departed from town and took Sherwin Creek Road to the Laurel Lakes dirt road. On the way up, our convoy of vehicles stopped where the road became impassible because of snow. This was our staging area. Gear was unloaded … again. The immediate goal was to get Jeremy to base camp on a snow field to the left of the couloir. Getting Jeremy up there was no easy feat. Between the cars and the tents were snow, a boulder field and lots of scree. MMSA’s Ski Patrol had lent us a litter and it was outfitted with a mountain bike wheel underneath. This was Jeremy’s “limo” from the cars to the bottom of Bloody.

At that juncture, Jeremy traded in the litter for a sled. This was no high-tech sled but rather an orange kid’s sled that had been modified for the expedition with climbing skins on the bottom, padding to accommodate a person lying flat and a hole in the nose to accommodate a rope. The idea was to assist Jeremy to base camp, but not carry him the whole way.

The going was rough. Within the first 10 feet, the sled tipped over. We still had 2,590 feet to go. The summit was a long way away. The late season snow was uneven and punctuated with rocks. The sled tipped and twisted. The rigging crew was undaunted and Jeremy was delivered to base camp with daylight to spare.

We pitched our tents flush with the rock to avoid the rock-fall that, among other things, Bloody is famous for. Beers were raised, dinner was eaten and gear was sorted for the next day’s early start. Sleep came hard, however, as the Eastern Sierra winds howled and buffeted the tents most of the night.

Saturday, June 2: We woke at 5 a.m. to perfect weather. Jeremy was carried to the couloir where he got into the orange sled. The main rope was outfitted with a Jumar pulley system that allowed McGhee to inch up the couloir one pull-up at a time. Looking up at the summit, the daunting task ahead began to sink in.

The sled pitched and rolled in the sun cups that pocked the late season snow. Jeremy focused on the top of each pitch or rope length. He extended his arms grasped the handle that had been rigged to the Jumar and pulled, extended and pulled, over and over again, hundreds of pullups turning into thousands.

He rested often, his head in the snow, his arms by his sides so that the blood would return to his limbs before they were again hoisted over his head. His legs rolled off the sled and his arms cramped. The Jumar system worked, but the ropes, daisy chains and carabineers got tangled more often than not, and required constant untangling. The sun rose higher in the sky while the summit only inched closer.

This was going to be a long day.

The first milestone achieved was arriving at the Rock Island, a massive rock outcropping in the middle of the couloir. We stopped there and rested. Jeremy got out of the sled, sat on the snow ledge and marveled at the view. Base camp seemed miles away, Laurel Lake glistened below.

Back in the sled Jeremy inched on towards the summit. Fatigue gnawed at everyone. Noon came and went, the sun climbed higher, and we were approaching the time the crew had set for turnaround. Safety was paramount and we needed to allow enough time to get everyone off Bloody Mountain before dark. 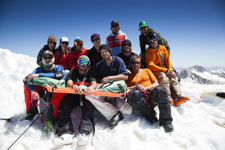 A bit after noon we heard a low hum that became louder and louder until we were able to see a helicopter. It had buzzed us earlier but this time there was a cameraman shooting through the open door. The presence of the chopper invigorated everyone and Jeremy redoubled his efforts. The summit was within reach.

Half an hour later Jeremy pulled himself up the last two feet of rope and buried his face in the snow. He had ascended Bloody, and was rewarded with access to the summit register, gorgeous views, and a mangled, but delicious and well-deserved PB&J sandwich..

It was a sweet moment. The views in all directions were stunning. Mammoth Mountain, Ritter, Banner and the Minarets smiled at us. I can’t pretend to know what Jeremy was feeling, but I was overwhelmed. I often take for granted that I can scale a mountain and enjoy the views from the top, and was reminded that not everyone can do that as easily. Looking around at the people who made this dream come true for Jeremy was very moving.

Photos were taken. The Summit Register canister was opened and everyone signed it. It’s a pretty safe bet Jeremy McGhee became the first paraplegic to sign the Bloody Mountain register!

Then, after a rest, it was time to descend. The Ridge Crew had brought Jeremy’s sit-ski up the ridge in a baby backpack. The single ski was fitted to the bottom and Jeremy was maneuvered into the bucket seat. Bloody Couloir is 2,600 feet of vertical and 45 degrees at its steepest. The snow had softened considerably, and conditions were far from ideal. None of this seemed to faze Jeremy. He was about to ski his first backcountry couloir.

The ski down was not exactly smooth sailing, but through my lens I could see there was not a moment when Jeremy wasn’t smiling. He linked turns, fell, got back up and did it again. By the time he got to the bottom the sun was behind the mountains and dusk was falling.

Jeremy is an inspiration to me and who knows how many others. He reminds us by what he does that life is what you make of it. In the register on the summit of Bloody, Jeremy simply signed his name and wrote, “Do what you love!”