Pictured: Coach Marty Thompson (center) was out lining the field Thursday morning following his graveyard shift at the P.D. He’s flanked by fellow coaches John Trujillo (left) and Lyn Morris. Thanks to Alpine Paint for donating the paint.

Underkoffler will start at Quarterback

The Mammoth High school football team, coming off a 5-5 season in 2011, opens the new season Friday, Aug. 24 at home versus Whittier Christian.

Per usual, it’s a numbers game for Head Coach Marty Thompson, but fortunately, he’s got a large enough roster to play.

Twenty-one kids will suit up for Friday’s 7 p.m. tilt.

One who won’t is Senior Co-Captain Matt Graef, who is battling cancer. This has dealt an emotional and physical blow to Thompson and the team.

“He’s the hardest worker I had,” said Thompson. “He was in the weight room all the time, studying film … “

If fans would like to support Matt, they can donate money for a 44-MAG wristband, available at the game or through Coach Thompson at the Mammoth Lakes Police Dept. 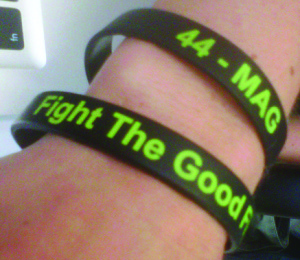 On the reverse side of the wristband, the message reads “Fight the Good Fight,” and that’s certainly what Graef’s teammates intend to do in his absence this year.

The key skill players on offense are tailback Tyler Wormhoudt (switched from quarterback), fullback Dennis Orrick (who plays linebacker on the other side of the ball), and quarterback Lucas Underkoffler.

Both Orrick and Underkoffler are juniors.

Senior Pablo Apodaca is also one of Thompson’s best players, anchoring a small, but fast and athletic line.

Lack of size up front, however, has caused Thompson to alter the playbook somewhat. You’ll see more zone-blocking schemes out of Mammoth as opposed to linemen being assigned to block a particular man on a play.

The challenge Friday night will be to match up with a Whittier team that not only carries twice as many players, but is also partial to the no-huddle offense.

Look for Whittier to throw the ball a lot, especially to #3, Bronkar, their star receiver, who has apparently already committed to play Division I football at the Air Force Academy next year.

Thompson hopes the altitude will slow Whittier down – that and his “skiers.”

“Our skiers are our toughest players,” said Thompson, noting that Wormhoudt, Underkoffler and Nick Domico are not only great athletes, but they’re in tremendous shape.

They’ll have to be to keep up with Whittier on Friday.