In his first-ever slideshow presentation, which he delivered at Eagle Lodge in Mammoth Lakes on Jan. 5, big mountain freeride snowboarder Jeremy Jones proved that his talents go way beyond snowboarding … in other words, he crushed it.

Jones was the keynote speaker at the Eastern Sierra Avalanche Center’s (ESAC) annual season kickoff and fundraiser. His slideshow was titled “Trophy Lines,” during which he spoke about seeking out and riding some of the most prominent lines in the world, specifically Alaska. His appearance brought in a huge crowd, and helped create one of ESAC’s most successful events on record.

Even with a technical malfunction in the middle of the show, Jones’s images of blood-curdling vertical he had ridden in Alaska, and his matter-of-fact discussion of how he’d felt while scouting, approaching and riding these monster mountains, peppered with bits of dry humor, kept the audience of more than 300 intrigued for over an hour.

Jones began his presentation with an answer he gave during a local media press conference held the Thursday prior to the event.

The Sheet had asked if he believed there was any truth to the ongoing discussion that oftentimes it is the most experienced riders and skiers that get into trouble in the backcountry (think the avalanche at Tunnel Creek in February 2012) because they became overly confident.

“I definitely think there is truth to that. I have made thousands of good calls [in the backcountry] but when I go out tomorrow that doesn’t mean anything,” Jones said on Thursday and again to the crowd on Saturday night. “I have to make sure when I go out that I am in the right head space to make the right calls every day.” 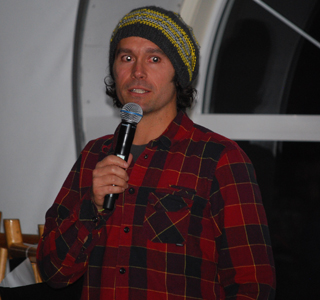 “I’m not a Ph.D. in reading a snowpack and avalanche awareness,” Jones said. “But I would say that I have a Ph.D. in terrain evaluation.”

In other words, Jones may not know if an avalanche is going to break lose, but the lines he chooses are ones that will take him out of an avalanche alive if one were to occur.

Jones advocated avalanche training during Thursday’s press conference and said that not only does he always wear a beacon, but he and his crew also spend four days every fall in what they call the International Pro Riders Workshop.

“We bring in experts and go over avalanche awareness and first aid,” Jones said. “We curtail the avy course to what we need in order to polish our ongoing protocol and review any mistakes that we’ve made.”

Jones said he has been in a few small avalanches, but nothing major.

Jones, who lives in the Tahoe area, told the crowd Saturday that he has been spending more and more time between Bridgeport and Lone Pine.

“About 80 percent of my riding is in the Sierra Nevada,” he said.

Jones’s wife, Tiffany accompanied him to Saturday night’s event, which was also attended by the legendary Glen Plake.