Tucked away just off route 395 outside Minden is a little place with a big history. The Genoa Bar, established in 1853, claims the distinction of being Nevada’s “oldest thirst parlor,” and has the accouterments to prove it.

First opened as Livingston’s Exchange, later renamed Fettic’s Exchange, the bar initially offered fine wines, liquors and cigars. The bar has since changed hands, taken over by Bob and Betty Carver in 1963, and later sold in 2000 to owners Willy and Cindy Webb. The current ownership has maintained much of the Genoa Bar’s dusty, cluttered charm, with original oil lamps hanging from the ceiling, and framed photographs of famous visitors, wanted posters yellowed with age, tin beer advertisements, and mounted antelope and bighorn heads jostling for space along the walls.

Raquel Welch in particular has left a lasting mark on the bar. As the story goes, Welch visited the Genoa to escape her fans while filming in Tahoe. At the time, the bar had a tradition of accepting lingerie donations from women visitors and using them as decoration. Welch was asked if she too would like to add to the collection, and she agreed on one condition: that all the other bras come down. Welch’s bra, so coated with dust that the leopard spots are almost invisible, still hangs from the horns of a mounted deer head on the wall. The rest of the bra collection has moved to an old safe, with a new tradition that whoever takes a peek must also make a lingerie donation.

Like any place with a storied past, the Genoa Bar also boasts its very own ghost. His name is Red, and according to Ellie McIntire, daughter of owners Willy and Cindy, 3 separate psychic investigators have concluded that he loves the jukebox. That jukebox is a large part of the Genoa’s charm, offering a mix of classic rock, country, funk, and oldies. 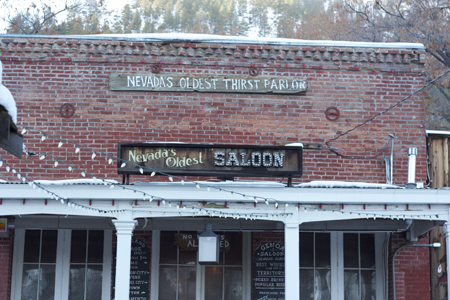 The Genoa Bar, established in 1853, claims the distinction of being Nevada’s “oldest thirst parlor,” and has the accouterments to prove it.

It’s this mix of local history and flavor that keeps residents and visitors coming back for more. McIntire said she never gets tired of answering questions about the bar’s history; “I love when people walk in and their faces light up,” she said. Her own favorite piece of history is the Diamond Dust Mirror, which hangs at the back of the bar, and underwent an arduous journey to reach Genoa. The mirror came from Glasgow, Scotland in the late 1840s, and was shipped around Cape Horn to San Francisco, then transported by covered wagon to Nevada. You can still see the sparkle of diamond dust in the depths of the mirror, with the help of a flashlight.

To McIntire, looking into the mirror conjures up the many faces that have gazed upon their own reflection over the past 160 years. “That’s what makes this place so special,” she said. “The history, and everybody that’s been through here.”

Commuters to Reno or Tahoe should take the opportunity to become a part of that history, whether by stopping in for just a look, a drink, or a game of pool. The bar is open 10 a.m. until everyone goes home, seven days a week.