Former Mammoth Lakes resident Buz Schott, now residing in Minden, Nev., is dying. He is in the final stages of cancer. He stopped eating on Sunday. The Sheet spoke to him Monday. In his honor, we will reprint an interview by Lunch which appeared in the July 18, 2003 issue.

Buz Schott is one of the few painters on the planet whose work inspires me to open my wallet.But besides being talented, he is good-natured and humble, has been humbled in this life, paints for the sheer joy of it, wears his heart on his sleeve, and tells you exactly what he thinks and doesn’t turn around and say, “Well, maybe I shouldn’t have said that.”

He says it. He shrugs his shoulders. He sips his coffee. He smiles.

I first encountered Buz’s work at this spring’s locals show at Clark Contemporary Gallery. He has this very eccentric, almost-cartoonish, rolling, wavy style, as if the entire world is being consumed by an earthquake, or a sitcom.

The painting that stood out was of a Drive-In Theater. Which is very Buz. Cars and highways litter his paintings. As do clowns, fire hydrants and the old-time window shades with the bottom ring pulls. Unsurprising really, since Buz started painting on leftover window shades when he was 30 years old. “They make great canvases,’ he said.

But what I like best about Buz’s painting are the small details. The license plate with the number 867 5309. Significance? It was half the title of an obscure rock song – 867-5309/Jenny – a hit for one-hit wonder Tommy Tutone.

And then, in his 1998 painting of the landmark Port Theater in Corona Del Mar (which had just closed for good), Buz captured the word ‘Rosebud’ which was left on the marquee (think Citizen Kane).

Schott’s personal favorite of his own work is currently hanging inside the Looney Bean. It’s called, “The Death of Mary Twelve Trees.”

Schott married at 19 to a woman he called “Old Ironsides.” He felt this was more socially acceptable than “Psycho Slut.” He was married to Ironsides for 26 horrible years, and when it ended …

“I went on a five-year debauch,” said Schott. “My life was never better.”

During this Celebration of Freedom phase, Buz quit painting. After all, he had catching up to do.

Schott and his family drove out to California from New York in 1944, the whole family piling into a ‘37 Ford. They took Route 66. It took over two weeks. The car kept throwing treads off the tires because one could only get retreads during WWII. 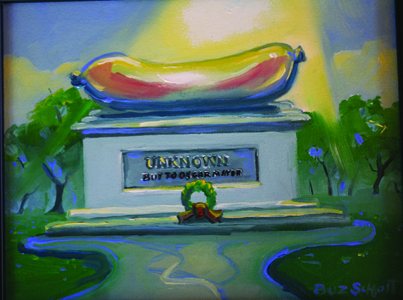 The Tomb of the Unknown Weiner. One of Buz Schott’s lesser known works.

He attended 13 schools growing up, but spent his formative years in Santa Ana where Buz became hooked on cars and drag racing.

Then he enlisted in the Navy, met Ironsides and spent much of the next 26 years in relative darkness, pounding nails in tract homes in Southern California. That’s how he lost the sight in his left eye. One bad swing. One ricocheted nail.

There were bright spots, of course, notably his two sons. However, one died at 26 due to a condition caused by a birth defect, and his second son has terminal cancer.

Of course he’s writing his life story. He has to. “I’m leaving all the ugly stuff in,” said Buz. “There’s a lot of ugly stuff.”

And good stuff. He swore he’d never remarry. He did. “Life has a way of making you eat your own words.”

1. “Sometimes,” said Buz, “you have breakthroughs when you do things really rapidly.”

4. Learn when to leave it alone

If you wish to learn more about Buz or how to buy one of his paintings (to help support his wife Heather), please contact Laurel Stanford Manning at 760.937.3595 or paisleyfineart@gmail.com