By Charles James
On the first Saturday of March in Lone Pine, as the sun rose in the east over the White Mountains, the snow-capped Sierra Nevada Mountains to the west lit up in a spectacular orange glow just as it has for the past forty years on the Early Trout Opener Fishing Derby sponsored by the Lone Pine Chamber of Commerce. Chamber President Marian Seiter reported that 370 fishermen and fisherwomen registered to fish at the derby held at Diaz Lake, located just south of Lone Pine.Lining the shore around the lake were numerous tents, RV’s, and motorhomes; many campsites with outdoor campfires to fend off the cold morning temperatures– which gave way as the day progressed to a balmy seventy four degrees. It was ideal fishing weather, with the wind only beginning to pick up in the mid-afternoon just as the derby was coming to a close.According to Chamber Executive Director Kathleen New, “We planted a number of tagged trout worth $25, $50, and $100. Along with trout purchased from Alpers, a large stock of trout was planted the night before the derby by the California Department of Fish and Game.”One such lucky winner of a tagged catch was 16-year-old Victor Rangel, Jr. of Ridgecrest, who won $50 for his tagged trout. Linda Duarte, the chamber’s office manager wanted everyone to know that anyone catching a tagged trout throughout March at Diaz Lake is eligible to win the remaining prize monies and said, “Please tell everyone to simply bring it to the chamber for their prize.” 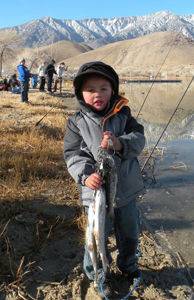 Float tubes, fly fishing rod, spinning rods, bait, and a whole host of other fishing goodies were awarded to derby winners. Ken Walters of Inyokern won the 1st Place Adult Largest Fish prize with a 4.42 ounce trout. The 1st Place Junior Largest Fish prize went to 15-year-old Bobby Beed of Ridgecrest as did the $800 Blind Bogey prize. He came with a much larger group of youth brought to the fishing derby by the non-profit organization TeachingKidsToFish.org based in Ridgecrest. Their motto: “Helping to keep kids off the streets by giving them the opportunity to learn how to fish and respect our environment.” Beed’s all in with that and might well have begun thinking about a future as a professional competition fisherman if his luck holds up as it did on this day!