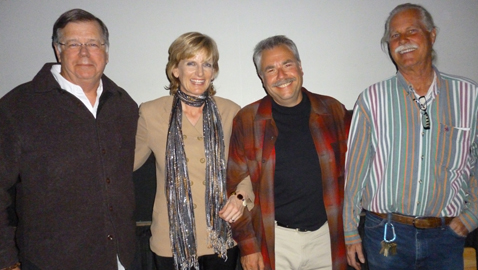 Ordinarily, when I sit down to review a movie, I get to see it before release. For “Oblivion,” I waited, choosing instead to go up to Mammoth Lakes for a local premiere when it opened in the U.S. on April 19. June Lake, a nearby community in Mono County, was one of the locations in the latest Tom Cruise film, and after all June’s gone through without having a ski season at its ski area, I figured the locals could use all the support they could get.

Tom Cruise is no stranger to big sci-fi pictures, having done two others in recent years: the underrated “Minority Report” and the overdone “War of the Worlds,” both by Steven Spielberg. The best of these three, though, could well be “Oblivion,” the second film by new director Joseph Kosinski, who wowed critics and fans alike with “Tron: Legacy,” his sequel to the Disney cult film “Tron.”

“Oblivion” reportedly originated as an 8-page treatment written by Kosinski, which was pitched in 2007 to Radical Publishing as a graphic novel. The project was subsequently developed into an illustrated novella for release along with the movie.

In the film version, Cruise plays Jack Harper, a technician on a post-apocalyptic Earth. Along with his partner (and live in love) Victoria (Andrea Riseborough), Harper, one of the last humans supervising the planet’s closeout, is in charge of maintaining drones that protect water converters supplying power for mankind’s new home on Titan, a moon around Saturn. Guiding them remotely is their boss, Sally, who is aboard a large space station, the jumping off point to Titan.

When a spaceship from decades past crashes, Julia (Olga Kurylenko), the sole survivor of the mission, causes memories to surface that call into question everything Harper knows. An encounter with more human survivors, led by the mysterious Beech (Morgan Freeman) only adds to his confusion, about his job, his partner and even about Sally. Soon Jack realizes the fate of mankind’s relies on what he does next.

The Mammoth premiere, small by comparison to LA soirees, was no less enjoyable. Locals celebrated their supporting roles, whether as background players, assistants or facilitators, and also cheered on the Black’s Pond locale that served as Jack’s oasis in an otherwise nuclear-trashed wasteland. Noshing on appetizers and a glass of wine beforehand, the event even sported a red carpet!

Before the movie, Mono County Film Commissioner Alicia Vennos, the evening’s MC, brought up various locals who shared their experiences. I spoke with June local Lienne Anderton-Smith, who served as Kurylenko’s stand in while shots were being set up, who said that Cruise often did his own stand in work. “He LOVED June,” she said. “He told me, ‘Wow. You get to wake up here every day.’”

After that, the film’s location managers, Mike Meehan and Ken Haber, showed before and after slides of the June location, and talked about how the filmmakers chose it. With a massive budget, the production filmed in New Orleans, New York City and Iceland before heading west to June Lake. According to Meehan, the original intention was for Jack’s oasis to be at Crater Lake in Oregon.

After looking back East for Kosinski’s Sierra location, which Meehan insisted wasn’t going to be found, a search commenced in the West and in Canada. Lobbying by Vennos, pitching Black’s Pond, a private piece of property surrounded by the high mountain walls of the June Lake Loop, finally got the attention of the producers. “I told them, ‘Maybe we were looking for the wrong thing in the wrong place,’” Meehan recalled.

Along with other visually stunning landscapes, both real and CGI embellished, June fits in perfectly, a calm, cozy spot amid all the chaos in Jack’s quickly unraveling life.

As Jack, Cruise easily carries the film. Even with all of the hoopla surrounding his divorce, which was happening right in the middle of filming, Cruise gives a strong, solid performance. As if that weren’t enough, he’s rarely looked better. You’d never know he was 50 and many of the women in the screening made mention of him as eye candy. 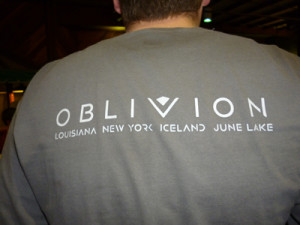 Local Dan Lyster sported his Oblivion t-shirt at the premiere.

And if you think his fly-boy technician character reminds you a little bit of Maverick, see if you can spot some of the movie’s other “Top Gun” nods!

Kurylenko, who previously captured Daniel Craig’s attention in the James Bond movie “Quantum of Solace,” is both lovely and captivating as the haunting beauty, Julia. Riseborough, who comes mostly from British TV and independent films, is spot on as the sexy, but snappy Victoria, making the most of what is likely her biggest feature role to date. Naturally, Morgan Freeman is always a solid pick for this type of supporting character, and his turn as Beech is no exception.

Rounding out the main cast is Nikolaj Coster-Waldau from “Game of Thrones,” who’s terrific as Beech’s menacing right hand man, and Melissa Leo is so good she’s just sickening as the smarmy Sally.

Speaking of eye candy, the film’s look, whether exteriors or integrated into sets, is jaw-dropping awesome. Photography by Oscar-winner Claudio Miranda (“Life of Pi”) is stunning, using a new high-definition camera process. Production design by Darren Gilford and set decoration by Ron Reiss (who’s been to Mammoth and June many times) are impeccably detailed, and should warrant consideration when Oscar nominations roll around.

The synthesizer-driven score by M.8.3 evokes “Blade Runner” by Vangelis and other techno scores for films such as “Run, Lola, Run” and “Fight Club.”

As far as the story goes, some in the screening found it a bit confusing, and that might be due in part to the editing. I got the sense there was a lot more footage bridging some of the scenes than actually ended up in the final cut. I liked it, but it does walk a fine line between being too conceptual and not intellectual enough. At its core, though, “Oblivion” is a character piece, and a decent one at that.

Suffice to say if you’re looking for interesting characters, wowing visuals and a story you can chew on along with your popcorn, you’d do well to spend a couple of hours in “Oblivion.”