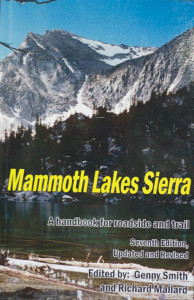 If you’re looking for a single, definitive guidebook to the Mammoth Lakes area, including hiking trails, local geology, biology, and natural history, you need look no further than Mammoth Lakes Sierra: A handbook for roadside and trail. Author Genny Smith, now in her 90s, first conceived of the book when she moved to Mammoth in the 1950s. “I lived in a little cabin up in the Lakes Basin,” she recalled, “and my friends and I had a hard time finding the trails. We wanted to go up to McCloud and we couldn’t find any pamphlets, maps, or guides. So we just decided, well, why don’t we try to write a little guidebook?”

Smith thought she would cap the project at a 15-20-page pamphlet; little did she know it would soon grow to more than 200 pages, with chapters written by experts in the fields of geology, biology, and natural history. “I certainly had no idea I’d ever be writing a book,” Smith laughed.

Mammoth Lakes Sierra has since enjoyed seven revised editions, with over 67,000 copies in print. Revisions have taken into account changes in roads and trails, as well as historical changes at Mono Lake from the 1950s to the present; DNA use in species classification for plants and animals, and new discoveries regarding earthquakes and volcanoes.

Yet in spite of the popularity of the book, which for a small region has sold an astonishing number of copies, Mammoth Lakes Sierra has been out of print since 2006. Smith tried shopping the book to many publishers over the past several years, but because of its regional nature, no publisher expressed interest. “I’d been looking around to find somebody who was interested in the book and knew a lot about the area to take it over,” she said. “I read Convict Lake: A True Account of the Convict Lake Rescue, and though, wow, maybe I should get in touch with this man.”

That man was author Richard Mallard, who used to live and work in Mammoth in the 1970s. “I was aware of the book and how wonderful it is,” said Mallard. “And when I was up in Mammoth doing a book signing for Convict Lake, I was talking about the state of publishing with [Booky Joint owner] Dave Leonard, and Dave gave me a copy he had. I looked at it and said, ‘I think that can be done through print on demand.’” Mallard used this technique with his Convict Lake book, printing copies on demand through amazon.com’s CreateSpace.

Mallard contacted Smith, and together they spent this winter preparing the updated and revised seventh edition, complete with a crisp new font and beautiful color cover photo of Valentine Lake, to be released through CreateSpace. “It was really an honor to be able to bring it back and get it on the shelves again,” said Mallard.

When asked why she thought Mammoth Lakes Sierra has enjoyed such enduring popularity for almost 60 years, Smith said jokingly, “I guess because it’s a good book.” In all seriousness, she added, “The information is reliable. I personally hiked all of the trails to make sure the information is correct, and went to lots of trouble to find experts to get the correct information on wildlife, geology, and history. I learned a long time ago that one person cannot be an expert in everything, so the most important thing I could do was find the best experts who were willing to write a chapter.”

Mallard noted not only the quality of these experts, but of expert Genny Smith herself. “The best part [about taking on the book] was I got to go through it,” he said. “I read it over and over again, and the more I read it, the more I learned. It’s just a wonderful book; wonderfully written.”