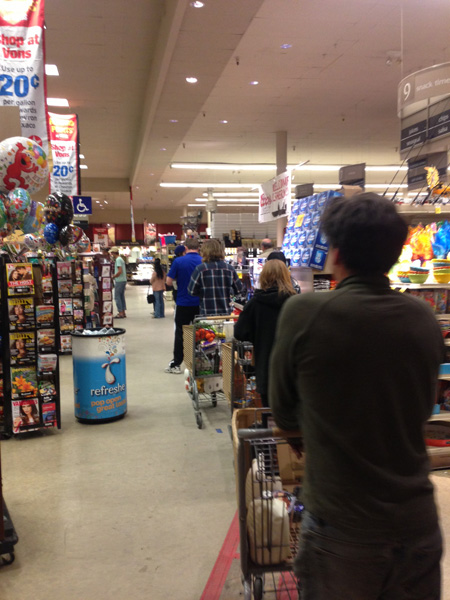 The $4.5 million Vons remodel is coming along nicely, but with every construction project, there is accompanying hassle: customers are having trouble finding the usual things and there are bins of clearance items over by the deli, not to mention the entrance is a tunnel of plywood below a skeleton of the store’s preceding forefront.

Since last week, the Vons teams have worked hard to reorganize the store one aisle at a time. Soap and shampoo have moved away from where the pharmacy is located to be replaced by candy and other glucose-infused snacks. Assistant manager Andres Villalpando says that everything is being moved around both because they’re “adding a larger variety of frozen foods, which will be located on aisle four beside the rest on aisle five” and the pharmacy and Starbucks are moving to the building next door. “We’re adding more of the items consumers buy the most of and reducing unnecessary ones,” he added. That explains the crates of sale items the store is purging from its inventory.

Despite the effort Vons is putting in to improve its experience, customers are having a hard time finding things. “It’s confusing,” said Courtney Green, resident of Mammoth Lakes. “If it’s gonna end up being better – like Rite Aid – then that’s great, but I don’t like not being able to park up front. The worst part is they keep moving everything.” Green wasn’t the only one having difficulty locating merchandise. Even German Fernandez, a frequent visitor to Mammoth, said “It’s taking me some time to get used to the new layout. I’m spending extra time here just to find what I usually buy.”

One local, Brian Johnson, was optimistic: “I’m sure it’ll be better once it’s done.”

When I spoke with Andres Villalpando, he made sure to mention that Vons does offer a store directory for any shoppers who are having a hard time finding anything. It’s available at the store’s management area. “Also, our Store Ambassador Greg Schmidt will be here 10 a.m. to 7 p.m. every day to help people find stuff,” Villalpando noted.

In addition to the interior redesign, Starbucks and the pharmacy will be moving out of the main building and closer to the Minaret Cinemas and Booky Joint. “When that happens, everybody who wants to buy coffee has to come upstairs, which means there’s a chance of them breaking off and making their way up here,” said Java Joint owner Karen Kasten. The business’ staff is worried about a corporate coffee shop opening so close, but they still believe that Java Joint has more to offer with crêpes and Hot Chick’s Rotisserie items on the menu, not to mention yarn.

Renovations at Mammoth’s supermarket will continue on through June and are expected to be complete by July 4th. In the interim, there’s no promise that ingredients for your favorite casserole or dog food for the poodle will be in the same place next time you walk in. But that’s the price of progress.