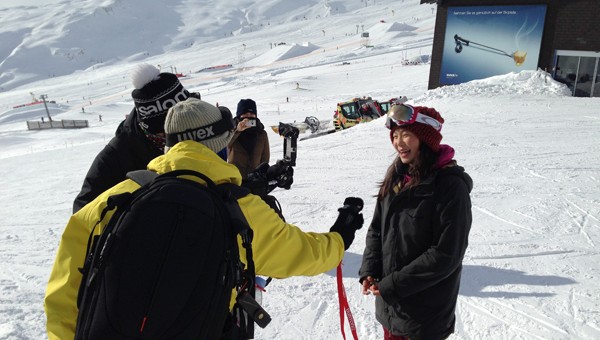 Chloe Kim during an interview.

Mammoth Mountain Ski Area is a world-class training ground for professional and amateur athletes in the snow sports industry and is proud to recognize Chloe Kim as a Mammoth Snowboard Elite Team athlete. Mammoth has the facilities, the people, the mountain, the equipment, the community and the contacts nationally to produce high level athletes. At 13-years-old, Chloe was recently named to the U.S. Rookie Halfpipe Team. This honor was received after years of training with Mammoth’s skilled professional coaches and training camps designed specifically for advancing athletes into their sport.

“The Mammoth Elite Team is a hand-picked group of kids from our main program, the Mammoth Snowboard Team. They must have the right attitude, athletic ability and drive to be a part of that program. These athletes train six days a week on hill with evening trampoline and gym sessions. The Elite Team travels to all the major USSA and TTR events,” stated Ben Wisner, Mammoth Snowboard Team Director.

Due to Mammoth’s long winter season, ski and snowboard camps are held every spring for athletes to practice, hone in on their skills, and excel to the next level. These camps can extend far into the summer months allowing athletes to gain more on snow time without traveling abroad. The opportunity that the Mammoth Snowboard Team provides along with the natural talent that Chloe exudes has set her up for a long and successful snowboard career. Chloe has been a strong competitor on the Mammoth Snowboard Team for the past three years with her career skyrocketing during the 2012-13 season delivering an impressive competition record:

Chloe was only 12-years-old when she received these results.

“Chloe is a great athlete, works extremely hard, and is very coachable,” Wisner continued. “The plan now is for Chloe to train hard and compete in the 2018 Olympics in Korea,” he said. Chloe’s main event is halfpipe, but she competes in slopestyle as well, dominating the competition in her age group and mixing it up with the pros.

Chloe has taken the snowboard world by storm and continues to train in Mammoth this spring with the U.S. Team. Born and raised in La Palma, Calif., she will be moving to Mammoth next season to pursue her snowboard training in preparation for the 2018 Olympics in Korea.

For more information on the Mammoth Snowboard Team visit http://www.mammothmountain.com/Mountain/WinterActivities/SkiTeam/ and follow Chloe’s journey to the Olympics. – Photo and Text courtesy MMSA