Outside of the local hiking and climbing community, few residents or visitors seem to have heard of The Rubber Room. Yet this small business has gained a foothold in Bishop, as well as a growing national reputation, since it opened its doors in 1999.

Inside The Rubber Room workshop, which is tucked away behind McMurry’s just off Main Street, climbing shoes hang in clusters from tall shoe trees, or line work benches next to the sander and pneumatic press in all states of repair. Rubber Room staff bend over shoes stripped of their soles, carefully restoring each shoe to its former strength and durability.

This is the specialty of The Rubber Room: giving new life to old climbing shoes.

The Sheet borrowed Tony Puppo, who co-owns The Rubber Room with wife Nan Puppo, from his band of re-soling elves, to talk about his unusual business, and whether, after repairing some 60,000 climbing shoes, he ever gets tired of looking at shoes.

Sheet: How did you end up in the climbing shoe repair business?

Tony Puppo: I got hired by what was at the time Wheeler Boot Repair in 1981, and it soon became Wheeler and Wilson, and now Wilson’s Eastside Sports. We were fixing all sorts of shoes then. A little before we moved over here, we had a sign up for a repair person, and the person that showed up ended up being my wife, [Nan Puppo]. She came in to fix a pair of shoes; we hired her, and six months later we were dating, and soon married. That was ’97. In ’99, Wilson’s wanted to expand, and we bought the business from James [Wilson] and moved it here in September of ’99. We’ve been in this location since then.

Sheet: Were you working on climbing shoes that whole time?

TP: Originally, working for the Boot Repair shop, I was fixing cowboy boots and ladies’ heels. Then I moved into hiking boots, when hiking the John Muir Trail was a really big deal. So I went from fixing all the regular shoes to hiking boots, and then to the rock shoe part of that business, as the shop expanded to offer that.

When we left Wilson’s we were resoling both hiking boots and rock climbing shoes. We hadn’t been doing regular shoe repair for a while. Then we moved over here, and we just got rid of the hiking boots for the space, and also because hiking boots have modernized and it takes more parts, and they’re all individual and that makes for a little bit of a headache.

Sheet: Some people might be surprised that a business that only resoles climbing shoes could survive in a small town.

TP: Well we don’t just do locals; our business is probably 85% mail-in from all over the country. It’s actually just under half from California, and the rest from all over.

Sheet: Is that because there aren’t many other shops like yours?

Sheet: Not to mention your logo, the Rubber Girl.

TP: We had a young artist here in town who drew her. We had to tone down his art a little bit. In our heads, we went with Betty Page as the model. Some people ask us who was the model—

Sheet: And how can they find her.

TP: We’ve also had some feminists who are upset because it’s a scantily-clad woman. But my wife always likes to tell people that it’s an empowered woman. There’s a woman behind this business that’s a fully empowered female, too.

Sheet: So what exactly do you do with the climbing shoes that come through the shop?

TP: Basically, we grind the soles off with heavy grit sandpaper, and then fix anything that needs to be fixed; fix holes; fix the rand, and get that all prepped up. Then we put glue on them, stick them together with a new sole, let them sit, trim them, and then do a finish sand on them. So not a lot of complicated steps, but a lot of crafty handwork. You’ve got to be able to have an eye for how the edge has to look.

Sheet: How long does that process take?

TP: We work on the shoes probably during a three day period, tearing them apart and doing some of the prep work; gluing them. If we do 300 pair a month, we’re busy. If we do more than that, we’re really busy. There’s no peak season anymore, with indoor climbing. And one of the reasons we’ve brought on another employee recently is because of that; because we can really only do about that much a month. So we’ve had, for the last year, a bigger backlog than ever before.

I think the reputable places that are busy, where people are willing to spend money to get their good shoes fixed, know that right now there’s too many climbers, and not enough quality shoe repair shops.

Sheet: Do you have to replace the entire sole of the shoe for common wear-and-tear?

TP: People wear their toes out all the time, so usually we repair the front half of the shoe. That’s kind of a throwback from the old days of shoe repair where, on a dress shoe, you used to do half and heel. With the way climbing is nowadays, you usually don’t need to fix the back end of the shoe. People aren’t hiking around in them like they used to. A lot of stuff that we do is for people that have never even touched rock. They’ve been climbing in gyms.

We do a lot of shoes for people in Florida, where there’s no elevation gain [laughs]. But there’s gyms. One of our workers told me that over the last three years, the Washington D.C. area now has ten new climbing gyms. 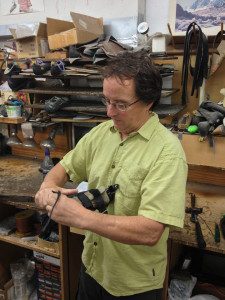 TP: Yeah. Climbing itself is, and gym climbing definitely is huge. Climbing has become very mainstream; I mean look at the Citibank commercial with Katie Brown and Alex Honnold. Old folks come in here to see if we’ll put a hole in their belt or fix something, which we still do, the odd repair, and they’ll say, ‘Yeah, my granddaughter climbs back home.’ That never used to happen. People never used to have even a concept of what we were doing with the shoes, but now people know what rock climbing is.

Sheet: Have you seen much of a change in climbing shoes themselves, over the years?

TP: They’ve gotten a lot more technical. There’s a lot more input into the design. I think there’s probably a bit more money in the industry, and like the running shoe market, it has to innovate. They’re not really a lot different, but as long as they’re going to redesign it, they may as well try to refine it as much as they can.

Sheet: Do you climb?

Sheet: Do you have a favorite spot in the area?

TP: No, it’s hard to pick a favorite spot. It’s kind of seasonal. I mean, I got to be here when there were a lot of undone things to do. We got to be some of the developers of the Owens River Gorge in its heyday. Back when it was bone dry, and a kind of very odd moonscape.

Sheet: So how long have you lived in Bishop?

TP: Since ’76. I grew up in Santa Barbara, and was in Long Beach going to school, and wanted to get out of there. I hadn’t really spent any time here; I’d been to Mammoth a few times in college, skiing, and had driven through Bishop, but a friend was teaching school here and said this is a good place, you should come. As opposed to Modesto, which is where my other friend wanted me to move.

I’m not moving to Modesto.

I came here because of the mountains. I was a climber at the time. I met the climbing community, and there were a few guys working at that shop, and I wanted to use their sewing machine one day, and I looked like I knew what I was doing. They needed some help, so I got a new job.

Sheet: According to your website, the Rubber Room has repaired something like 60,000 shoes over its lifetime. Do you ever get sick of looking at shoes?

TP: Sometimes, but not so much. In my thirties, when I was doing this, this was definitely not something I wanted to be doing for much longer. People used to say, ‘You should buy this place,’ and I would say, ‘I don’t want to work six days a week,’ because I knew that’s what would happen. But when my wife was working with me, then it was, ‘Hey, maybe if we did buy this place, then at least I’d have a partner; it wouldn’t just be me.’ So having a partner made it possible for us to buy it, and at that time, the business was not doing so well. I was managing it, but the owner of Wilson’s wasn’t really working in the repair department, and you kind of need the owner working there, I think, to make it work well. So we turned it around, and it’s always been a positive growth since then.

Sheet: What do you enjoy the most about repairing climbing shoes?

TP: The new shoes that come along are always a challenge, so that’s good. Over the years, you go to a trade show and think, ‘What are we going to do with this one?’ You don’t usually see them for another six or eight months when they start wearing out and coming in, but that’s fun.

And we climb a lot vicariously, because our shoes go out all over the place. I’ve resoled shoes for some pretty famous climbers; Lynn Hill climbed in some of our resoles. A lot of other people have climbed in our shoes. I just enjoy making people’s weekends, and turning their old favorites back into something useable again.