Local icon Tom Johnston, who spent many years at Mammoth Mountain in various capacities, most notably as a photographer, passed away recently, age unknown. He was believed to be in his 80s.

According to Mammoth historian Robin Morning, who’s done a few interviews of Johnston over the years, he was born in Columbus, Ohio and moved to California as a toddler.

Upon graduation from Whittier College in 1951, he moved to the Eastern Sierra and spent several years teaching in the Lee Vining and Mammoth schools. On the weekends, he would teach skiing.

A self-taught photographer, he got into photography in the ‘60s as demand for photographs increased from newspapers and for marketing brochures, and as Mammoth’s founder Dave McCoy recalled, “T.J. just dove in and helped.” He printed all his own black-and-white photographs in a makeshift dark room created under a stairwell in Main Lodge.

Personally, Johnston, a lifelong bachelor, was an old school, free spirit. “T.J. was always coming and going,” said Morning. He had his route, which encompassed Southern California, Mammoth, Wyoming and Sun Valley, Idaho. “He was always good about getting there [to the next destination] for dinner. He wouldn’t tell you he was coming. He’d just arrive.”

Reached by telephone Thursday morning, McCoy said of T.J., “Nothing was ever serious [with him],” recalling how T.J. used to ride his bike around with a big flag in the back. “But he was a great guy, so good with kids … I recall one time. He didn’t like rhubarb pie, so my kids tossed him on the floor and made him eat it.”

“Every black-and-white picture that’s around here … he probably took it,” added McCoy. “He called me recently to tell me how to make my pictures better. He always wanted to tell me how to do everything,” chuckled Dave. 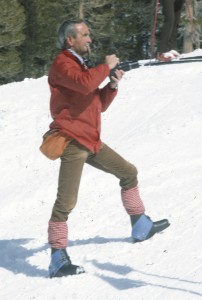 Morning recalled how T.J. liked to shoot a bow-and-arrow, lift weights and play tennis. “As I said, he was always on his way to do something.”

In essence, T.J. was A.D.D. before they came up with a name for it.

He also knew how to delegate.

As Morning recalls, when she came back to Mammoth looking for a job in 1969, Johnston, who by then had a full-time position within the ski area offices, told her that she was the new race director.

Morning: Well, what do I do?

T.J. (handing her a folder): You’ll figure it out.