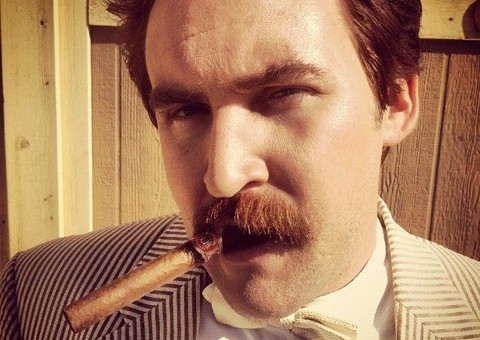 Jesse Steele presents staged reading of “The Diaries of Eden”

Jesse Steele is a ball of fire. Quite a contrast to Mark Twain, who was reputed to talk so slowly it could drive a listener crazy.

Steele has channeled Mark Twain into a trio of screenplays about the writer, who passed through the Eastern Sierra in the 1860s when he came to Lee Vining and Mammoth, hitting the mining camps in his short-lived desire to strike it rich as a miner.

He began his travels as Samuel Clemens and ended them as the writer Mark Twain.

The centerpiece of Steele’s three-part movie project is “Diaries of Eden,” in which Twain is a miner who discovers his talent for storytelling after hours in the local saloon.

In this screenplay, Steele and Twain demonstrate a shared raucous and sometimes diabolical sense of humor.

A staged reading of the “Diaries” will be presented in the main lobby of the historic Heidelberg Inn in June Lake on Friday, Jan. 24 and Saturday, Jan. 25, starting at 6:30 p.m. No costumes, but the local actors walk and talk with scripts in hand. Admission is free, refreshments provided. Donations are welcome.

“I’m really excited,” Steele says. “This is the first time we’ll have an audience to hear it and we can judge what stays and what goes by their reaction.”

Steele’s passion for Twain is natural, since he is a direct descendant of the American author and humorist.

He was a working actor in Los Angeles when he encountered Mark Twain, and now, after some pretty serious immersion in Twain’s life and writings, Steele knows Mark Twain as if the writer were inside him.

When Mark Twain got under his skin, and Steele discovered the wealth of professional talent, not to mention the incredible scenery in the Eastern Sierra, he relocated here—permanently.

“He [Twain] has changed my life. I’ve gone from an actor in L.A. to CEO of my own production company (Stainless Films),” Steele says.

Steele envisions his three short films (30-60 minutes each) being combined into a feature-length film.

The first film by this multi-talented actor/writer/director is “The Starvation Proclamation” (adapted from Twain’s satirical piece, “Cannibalism in the Cars”).

“The Starvation Proclamation” was shot at Laws Railroad Museum in Bishop last year with Eastern Sierra actors. The story centers on a handful of politicians stuck in a train car in an avalanche, and how they survive without access to food … Classic Mark Twain, Steele says.

Cameramen Jonah Matthewson and Cody Tuttle are both Mammoth locals whose work as National Geographic and climbing video cameramen give them a unique point of view in filming the movie.

The cameramen are only two of the 83 cast and crew members wrangled by Cleland Hoff of Film Mammoth for this project. Hoff and Steele met some years ago when they worked at Sierra Wave TV.

“We were an unofficial union where we could all lean on each other,” Steele says. Impressed with the high level of professional talent in the Eastside, he is constantly praising his colleagues.

Meanwhile Hoff offered praise for Steele: “Jesse is enormously talented in so many different facets of film,” she said. “I was impressed that he could make a film with basically no money, using imaginative and local resources rather than just throwing money at it.”

Once “The Starvation Proclamation” was in the can, Steele turned his hand to Twain’s hilarious “Diaries of Adam” and “Diaries of Eve.” He has woven the stories of Earth’s first human beings with Twain’s (imagined) sojourn to Keeler, Calif., in the Owens Valley.

Steele’s production company, Stainless Films, has already shot the Adam and Eve scenes for “Diaries.” The Mark-Twain-in-Keeler scenes will be shot in April.

For the reading, local actor Jarrett Jackson will be the outspoken Louella, the spirited, unquenchable, married woman Twain beds. Called Mammoth’s Meryl Streep, Jackson recently performed in “To Kill a Mockingbird” (in which Steele played dual roles as Boo Radley and his brother).

Alice Susyzinski provides narration for the diairies, and organized the event.

The third of Steele’s Twain films will target Twain in Virginia City, where he goes from Samuel Clemens, the wannabe miner, to Mark Twain the writer. He sits down at a bar and listens to a story about the Calaveras County jumping frog, then writes the story.

31-year-old Steele, who has had film on the brain since he was 15, did local access TV shows while in Big Pine High School, including a knock off of “Wayne’s World” called “Get Real with Jesse Steele.”

He went to film school in Santa Barbara and learned editing, lighting and camera work at Sierra Wave TV in Bishop. His time in Hollywood was spent acting in short and feature films and commercials.

Next up, after the Jan. 24-25 reading at the Heidelberg Inn, Steele will be spotlighted in the second evening of “How To Mammoth” talks, in: “How to make a film, with no money, about Mark Twain in the Eastern Sierra.”

Now all he needs to complete his transformation into Twain is the white ice cream suit we associate with the humorist. (Anybody with $300 to donate would be added to the list of people Steele praises.)

Diane Eagle Kataoka is a freelance writer/journalist/blogger with an emphasis on arts, culture and lifestyle. In her free time, she writes, skis and hikes.