When the snow is so-so, it’s time to venture further afield

Even in the midst of a truly epic winter, an Eastern Sierra resident can go a little stir crazy. Take away the pow and that craziness comes on a lot quicker. With the winter of 2013-14 turning into a distant dream, I decided to escape my own cabin fever this past weekend and visited the closest place I could think of with even less water than the Eastside: Death Valley National Park.

Death Valley offers remarkable contrasts, from parched valleys to snowcapped peaks, and from narrow canyons to immense sand dunes. The Park boasts several dubious records as well: as the hottest place on earth, the driest place in the U.S., and the lowest point in North America. Suffice to say, I expected a desert wasteland. What I discovered instead was a terrain full of hidden treasures, as well as some treasures in plain sight.

I began my trip on Friday night with an intrepid group of companions: Andrew, a one-year Mammoth resident and the only member of our group to have visited Death Valley before; Matt, an architect living in San Francisco; and Adele and Jacob, a couple of AmeriCorps restoration ecologists working in Nevada City.

We loaded Matt’s 4Runner with camping supplies, including a cooler filled with a variety of beverages ranging from Mammoth Brewing Company to Rolling Rock, as well fresh fruit and veggies, salami, cheese, pasta, and any other luxuries impossible to enjoy on backcountry camping trips.

In the land of extremes, we aimed to spoil ourselves rotten.

Our first stop of the journey: Tacos Los Hermanos on the south side of Willow Street in Lone Pine. This taco truck offers some of the best food along Highway 395, from $2 adobada tacos to $6.50 burritos, plus a generous salsa bar.

Stuffed full, we headed down 395 to Hwy 190, around the back side of Owens Lake, through Keeler, and up over the first pass into the Park. Our route took us a few miles past Panamint Springs onto an unmarked dirt road that would lead, we could only hope in the dark, to the Panamint Sand Dunes.

We made camp off the road that night and woke on Saturday to a beautiful sunrise and perfectly mild weather. We had indeed found the right road. A three mile hike later, and we were at the base of the dunes. Panamint Dunes present not only a surreal, sensual landscape in the midst of dry desert and dark peaks, but also an expansive view down the valley.

After a hearty lunch back at the car we headed down the road, cresting Towne Pass into northern Death Valley. Simply put, the views were enough to blow my mind. The mountains, which rise to heights of 10,000 feet, are marbled with pale, otherworldly greens, creams and pinks, while the apparent bareness of the valley floor quickly gives way to surprising oases like Furnace Creek, and the vast salt flats of Badwater Basin.

Furnace Creek is a natural oasis transformed by a campground, gas station, kitschy restaurant and gift shop. Our only reason for stopping there: the lure of China Ranch honey dates, sold at the gift shop, and the campground pool. 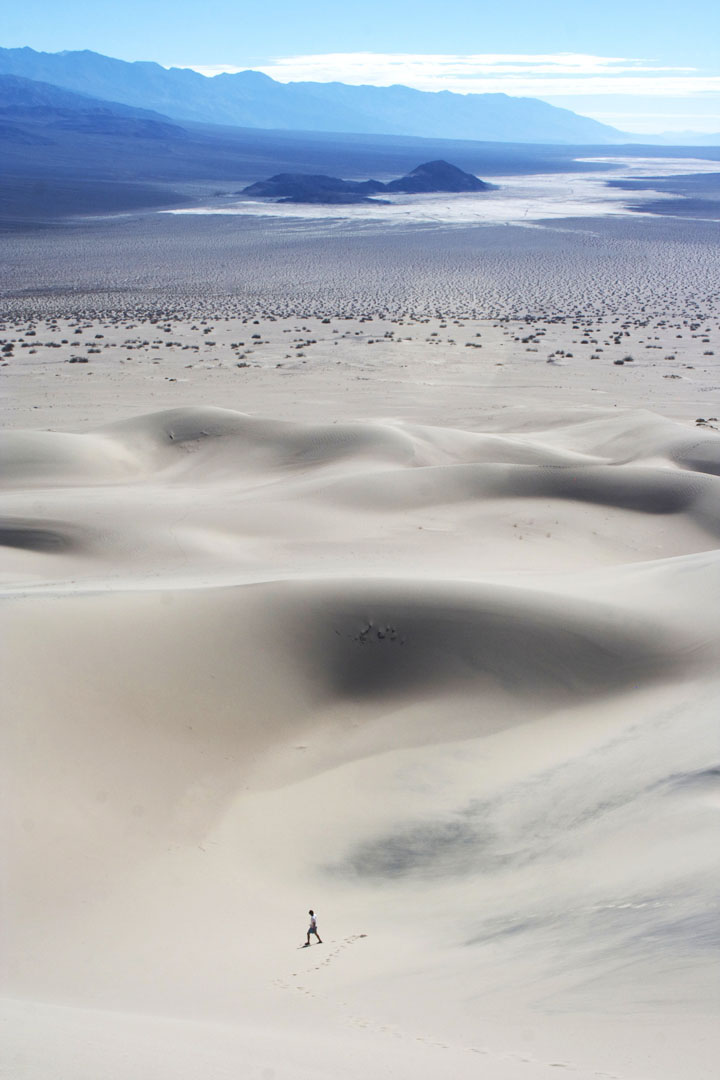 We gained entrance to the pool with a well-executed dirtbag reach-around. Campground residents roasting in the mild winter sun barely gave us a second glance. A couple laps across the pool later, free of sand dune grit and sweat, we were ready to continue down the valley.

Our final stop on Saturday was Badwater Basin, the lowest point in North America. Badwater is a vast salt flat, a cracked honeycomb of sharp salt crystals that stretches as far as the eye can see. It was the perfect spot to sit with a beer and watch the sun go down on Death Valley.

The next morning, after camping off another dirt road just outside of Furnace Creek, we headed to Zabriskie Point. Zabriskie Point offers enticing views of, among other things, the Manly Beacon, named for William L. Manly, who guided ill-fated forty-niners out of Death Valley during the 1849 Gold Rush. Gazing at the proud formation, you might imagine it’s named Manly Beacon for other reasons as well.

From Zabriskie we dropped back down to Badwater to enjoy the Artist’s Drive. This one way, nine-mile rollercoaster of a road gave us great views of Death Valley’s vividly colored sedimentary rock, which includes splashes of green, pink and purple from oxidized metals.

Heading back toward Furnace Creek, we pulled over for a short hike up Golden Canyon. Most travelers go only a short ways up the trail for a view of the base of Manly Beacon before turning back, but I highly recommend the four-mile loop, which follows a bridge of desert ridges down into flash flood wash basins and gullies. Keen eyes can spot the openings to borax mines peppering the slopes.

Once we finished the loop, we climbed back into the car and began the long journey home. Two passes and 175 miles later, we concluded our weekend of indulgence with a stop at Las Palmas in Bishop, where we filled our bellies with burritos that kept the car warm and fragrant for the next 45 minutes up to Mammoth. There we parted ways with nothing but good memories of our weekend of adventure in Death Valley National Park.