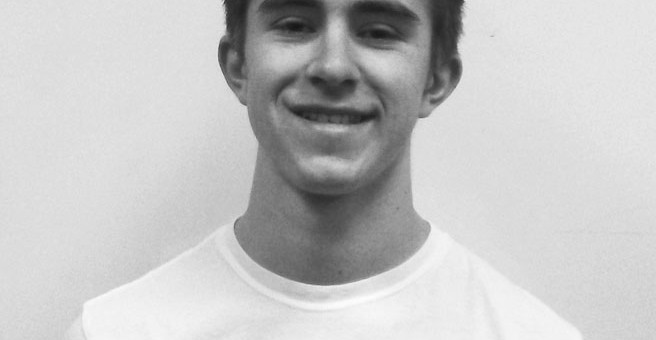 The MHS Varsity Boys Basketball team has finished off its 2014 regular season, awaiting word as to whether it has qualified for the playoffs.

But if there are no playoffs, and the season ended last Friday night (Feb. 7), this team and its six seniors will go out on top having played the game of their lives.

Down by 14 points at halftime against Boron, the Huskies came back to win it by nine, 86-77.

A key component of that win is this week’s MHS Athlete of the week: Team captain and point guard #3 Cole Presson.

Cole is a humble kid. I’ve known Cole for a few years, and I am equally excited as the rest of this town to see that he was quite recently accepted into Cal Poly San Luis Obispo and will begin his college career in September. With an overall grade point average of over 4.0, this is a student-athlete who has shined as brightly in the classroom, as he does on the court. His favorite school subjects include math and science. Says Presson, “I like how answers are black and white, compared to Economics (the class I currently teach Cole), which is theory and opinion-based.”

Cole is looking forward to college; to lifting his wings to meet new people and expand his social network. The scholastics will come naturally to this gifted student.

On the court, Cole played two years of basketball in middle school, and all four years at high school. He played varsity level his entire high school career. What is really great about this Class of 2014 is that most of his senior teammates played with him the entire run. This group of warriors includes Fox Kailiawa, Denis Orrick, Matt Graef, Liam Carrigan, E.J. Banda, and Presson. Their collective win last Friday against Boron included playing against a team which brought with them an opposing shooter who hit 12 three-point shots (48 points) in the first half alone. This group knows each other well enough, that they adjusted at half, and made the surreal, very real.

MHS Basketball Head Coach Robbie Presson shared with me of Cole, “He averaged about ten points a game this season. 4 ½ assists. 6 rebounds. 3 steals. He’s a four-year starter at point guard since his freshman year. Cole is a great teammate. He is humble, works hard, and keeps a calm head. Cole runs the team on the floor. He sees things very well, and makes adjustments, making my job easier. Both he and Fox play entire games from start to finish.”

It’s no doubt that this group left their mark with Coach Presson. “The kids are all great kids,” he said. “We saw major improvement from the past seasons. There was some tough competition in league this year: Desert Christian and Lone Pine. Lone Pine is still undefeated.” The team is sitting in limbo right now, waiting to see how Vasquez High School finishes out its season. A couple Vasquez losses locks up the Dawgz in the playoffs.

As for our all-star this week, Presson offers sound advice to his peers: “Time management is super important for everything. Balancing school, sports, and friends requires managing your time wisely.”

Wisdom is a trait that this student-athlete has capitalized on. Cole is already thinking of an MA in Engineering, after nailing his Bachelor of Science degree. He is looking at a career within the field of engineering, with sights set on playing pick-up games and intramural hoops at SLO to break up the lecture hall discussions. He credits a lot of his court success to time spent at Snowcreek Athletic Club, either shooting baskets with his pops or playing pick-up games.

Cole’s favorite professional sports team is the Purple and Gold. “They’re [Lakers] not doing so well this year,” Cole says. His favorite player is Los Angeles crosstown rival Chris Paul. “I try to model my play after his (Paul). He is a great dribbler and passer,” Cole said. I’m with Presson on his admiration of Paul, I got my money on the Clippers in the NBA playoffs this season.

Cole is inspired intrinsically just by wanting to do better at school and basketball. What motivates him extrinsically? To no surprise, his coach and his teammates. It’s been a while since we’ve seen a senior class gel so well together in hoops. The Class of 2104 set the bar high. Cole Presson was more than a part of that process. He was a leader. Cole, you make me proud. You make our town proud.