Alexis Rousek follows through on a free throw.
Mammoth High School Girls Basketball Coach William Bauman is, in a phrase, a force of nature, an irrepressible personality.

That Mammoth has no history of success in Girls Basketball does not faze the 27-year old Bauman one bit. Competing with the other winter sports (soccer, skiing) for athletes isn’t a deal-breaker; it’s just a bit of a nuisance. He has zero doubt that he will turn the program into a winner. And clearly, his players buy in.

The future also looks promising, as the top three players from his 13-player roster will return for the 2014-2015 season. They include:

Kira Shultz, who averaged 16 points, 8 rebounds and three assists per game in her sophomore season. Bauman is pushing for 1st team all-league honors for Kira.

The starting point guard this past year was Kira’s sister Lydia, a junior, who averaged 6 points and 6 assists per game. Bauman calls Lydia “the toughest kid at Mammoth High School. Period.”

Also returning is starting Center Alexis Rousek, who averaged 8 points and 14 rebounds per game this past year. She was second team all-league in 2012-2013.

It’s hard not to believe in the coach’s cred when he establishes a summer basketball camp and brings in a former NCAA Division I star and a former NBA player as his teaching assistants.

The former Division I star happened to be his sister, Kate Judd, a 6’6” center who went to the NCAA tourney’s Sweet 16 in each of the four years she played (two with Iowa State and two with U.C. Santa Barbara).

The former NBA player was John Block, USC class of 1966 (and still one of the top scorers in Trojan history) who went on to play 10 years in the NBA, even playing in one All Star game. 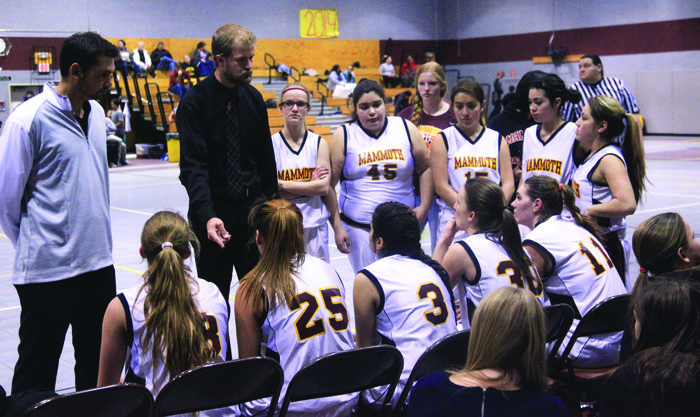 The 6’10” Block, who also coached professionally in the ABA, still works as a specialty coach for centers and big men on both the collegiate and professional level. For the camp last year, Block also brought along his college roommate and current coach at Point Loma Nazarene, Bill Westphal (brother of former NBA star Paul Westphal).

In other words, a star-studded cast.

The camp was held from July 19-28. The first five days, there were seven Mammoth team participants, who were then joined by players from Vasquez and Immanuel Christian. Bauman plans to do another camp again this year.

Bauman and Block were initially introduced because Bauman, 6’7”, a former NAIA basketball player at Jamestown College, had lined up a few NBA Developmental League tryouts. He serendipitously met Block and the two began meeting at Snowcreek Athletic Club for 6 a.m. workouts.

And then Bauman learned that his wife Danielle had cancer.

And that was the end of the workouts.

Bauman married Danielle Eastman in 2011 and right off the bat, the couple was challenged not only by the cancer, but by two brain surgeries for Danielle to shore up a leaking blood vessel.

Bauman said simply, “Life is haymakers … it’s totally how you respond to getting knocked down, because you’re gonna get knocked down. My wife and I … we get up on two feet.”

Bauman describes Danielle as the “Mother Bear” of his team. The couple host about three spaghetti dinners each year at their home for the team.

Speaking of getting knocked down, Bauman said one of the most inspirational players on his team is Taylor Sanders. Sanders, a sophomore, tore her meniscus during volleyball season and couldn’t play basketball this year, which was a definite bummer for a girl voted “Miss Hustle” at the summer camp.

But, he said, she still showed up to practice early every day this season, and traveled to all the away games.

She ended up becoming the team’s scorekeeper. Bauman looks forward to having Sanders trade in her pen next year for some playing time.

So how does a basketball coach recruit players in a ski town with a large hispanic population devoted to soccer?

First, Bauman said he likes to go to the girls volleyball games during the final few weekls of the season, so he can introduce himself to the freshmen and sophomores and ask them if they  ight like to try basketball.

Second, he runs the 6th-8th grade basketball program for the Town’s Recreation Department – another way to get kids hooked on basketball, particularly basketball the way he’d like to see it played.

“Our goal, at the high school level, is to play a moderate transition game. But right now, around the league, we’re known for our toughness and our intensity.”

This Saturday, Bauman and assistant coach Toups will drive down to Boron at 5 a.m. so they can participate in a discussion regarding all-league selections.

That’s a seven-hour roundtrip to lobby for a little recognition for a few players.

Which pretty much explains what you need to know about Mr. Bauman and why his players work so hard for him.