Tom and Heidi Lonsdale will serve you coffee … in Mexico

Either of the two Looney Bean Coffee Shops in Mazatlan, Mexico are packed daily during the winter with tourists and locals— old friends catching up and newly introduced friendships forming. There are people from all over the world and lots of Americans, Canadians, and Aussies. You can order a Looney Latte or fruit smoothie, along with an assortment of freshly baked pastries and desserts. You can even purchase Looney Bean Mazatlan apparel and locally made accessories. Sound at all familiar?

There is one huge difference— instead of ski pants, jackets, and scarves, people are wearing bathing suits, Hawaiian shirts, and sunscreen. Instead of heaters and fireplaces, there are several area fans and roll up doors that are always open during business hours. Mazatlan is a vacation destination and beach resort city of 500,000 that caters to northern snowbirds escaping the long winters in the U.S. and Canada. The resort attracts surfers just as much as retirees, as the crowd at either of the Looney Beans demonstrates.

So how did Looney Bean Coffee, which started in Mammoth, get to Mazatlan of all places?

Meet Tom and Heidi Lonsdale— the energetic, friendly, and down-to-earth parents of six and grandparents of seven (almost eight). Tom and Heidi started the first Looney Bean in Mazatlan in 2007, and the second in 2008, after living in Mammoth and Crowley for almost thirty years from 1978-2006. They raised four of their six children here, ran small businesses, led a service-oriented mentorship residency program at Church on the Mountain in Crowley called Master’s Commission, and were an integral part of the community.

“I had no idea I was going to move to Mexico,” Heidi said in February. “If you asked me at 30 ‘so what are you going to do with your life?’ I would have never told you I am going to live in Mexico and run a coffee shop. I would never tell you that.” Nevertheless, here they are— running not one but two coffee shops with the help of their daughter and son-in-law, Shelly and Dusty Harrington. “It was a great change for us,” Tom said. “For me, being at my age, I was almost 50 when I got out of heavy construction, it really was time. It was such a good transition.”

While living in Mammoth and Crowley, Tom ran his own masonry business completing the rockwork inside and outside many homes and condo complexes, as well as the outside of Schat’s Bakery and Main St. Chevron. Heidi was a swim instructor at Snowcreek Athletic Club, cleaned houses through her own small cleaning business, and helped administrate Crowley Christian School, in addition to raising their kids. 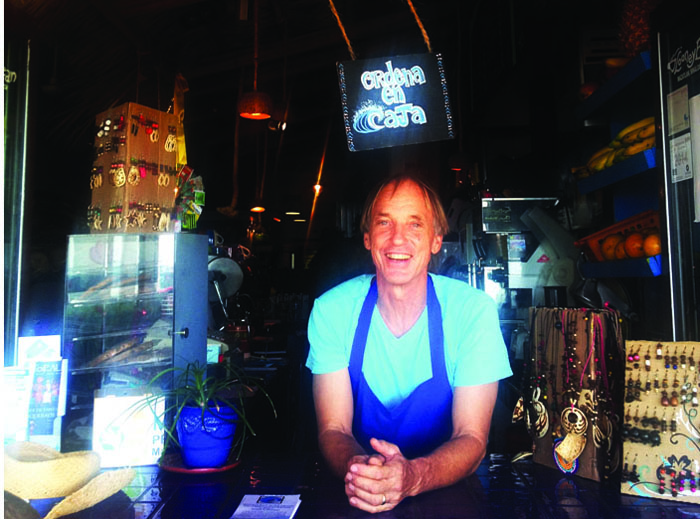 Eleven years ago they started going to Mazatlan during the winters with their Master’s Commission groups. They would spend two or three months helping local churches with service and building projects, integrating into the community and getting to know the people. “That’s when we started cultivating relationships with all these people we still have relationship swith,” Tom said. After five years of visiting in the winters, Tom and Heidi decided to move to Mazatlan full-time and start the Looney Bean with the vision of continuing to give back to the community.

Tom asked Brent Kennedy, the former owner of Looney Bean in Mammoth, if he could start a shop in Mazatlan and Kennedy agreed. He even donated some old equipment to help the Lonsdales get started. Tom and Heidi sold their house in Crowley and with money saved up from his masonry work and some extra support from Church on the Mountain, they moved to Mazatlan in December, 2006 with their two youngest daughters, Mia and Brisa who are both adopted from China.

But starting up a coffee shop in Mazatlan wasn’t as easy as the Lonsdales had hoped. They ran into a couple of fraudulent deals when it came to renting a space and ended up losing most of the start-up capital they had gone to Mazatlan with. They had to hire lawyers, go through the Mexican court system, and still never got their money back. “A year into it we had been defrauded out of all our money, had all this equipment and no place to rent and we had no money,” Tom said. “But, man, people in Mammoth just had our backs.”

After spending the summer of 2007 back in Mammoth working masonry jobs, Tom returned to Mazatlan ready to start again. The Lonsdales finally settled on a spot— out at Playa Bruja—at the end of a long line of beach resorts and hotels. People told them they’d never make it out there but the rent was cheap.

“I didn’t even know how to make a latte. I thought let’s just get the equipment going and learn how to run the business. And then we can look for another spot,” Tom said.

Kennedy and few other friends from Mammoth came down to help Tom start up the shop. They built out the space with tiled counters and a rock fountain while Kennedy tried to give Tom a crash course in coffee, teaching him how to roast and make drinks in two weeks.  “I was a bricklayer, I wasn’t a barista,” Tom said. Kennedy “did the best he could. But we really had to learn it all on our own.”

The Looney Bean Mazatlan wasn’t a success overnight. That first season the swine flu hit Mexico and most of the tourists left Mazatlan. Then they made the mistake of staying open through the hot summer season when no one visits the beach. And yet, Tom continued to forge ahead opening a second shop in the downtown area of Mazatlan the next season.

Tom laughed the entire time he was telling the start-up story, still in disbelief of all details. “But then to see it like today,” Tom said. “To think that we’re giving back thousands of dollars to the community, we’re providing 35 jobs for people and we’re making a living… It’s really working, but it’s been seven years.”

For the last several years, the Looney Bean Mazatlan has given a percentage of its profits to help people in the community. “We’ve paid funeral costs, wedding costs, built houses, donated drinking water and food, thrown parties and given people medicine. Lots of medicine,” Tom said.

The Looney Bean’s most recent project is a house for Suzanna, a 23-year-old widow. Suzanna lives in the neighborhood right below the city dump, a neighborhood Tom and Heidi have been investing in for years. There is a mix of concrete houses and other homes built out of cardboard, plastic, metal, and anything else that can be used for shelter. The adults spend their days sorting through trash at the dump, picking out plastic, aluminum, and anything else of value that can later be sold. Children run around the neighborhood with little supervision and discipline, older children often taking care of babies.

Heidi met Suzanna last year, at a large party the Looney Bean threw for the neighborhood complete with food, a live band, and dancing. “Right away, I felt drawn to help her,” Heidi said. Suzanna’s husband had recently been murdered and she had a brand new baby— her fourth.

At first Tom and Heidi thought they’d just help Suzanna out by renting her a house, but found it difficult to get a good price. “And then we realized she had no drinking water, no food. So we just started doing donations of drinking water and food and drinking water and food … And then we stepped it up,” Heidi said. “We built her the house and we stopped donating food. We really feel like we shouldn’t give them everything but to do small amounts.”

Suzanna’s house isn’t quite finished; there are posters hanging at the Looney Bean asking for more donations to finish the bathroom, which Tom and Heidi expect to be able to complete soon. Suzanna’s house is just one of many projects Looney Bean Mazatlan has completed over the years with donations from the two coffee shops, as well as, from a lot of their customers.

But Tom’s vision doesn’t stop there: “Really, our whole heart with this thing is to help other people do it.” He would love to see Looney Bean franchised around the world with a similar business model of creating revenue to give back to the community. “I’m just so surprised that we’ve never had one young couple be like ‘we really want to do that, will you help us? Will you show us.’ Never in seven years,” Tom said. “Maybe I’m just naïve because I’m so into it.”

Tom’s passion, for coffee and the people he serves it to, is undeniable. Admittedly a coffee addict, Tom drinks at least 12 cups of coffee a day. He’s been known to say, “Let’s drink as much coffee as we can and then sell the rest.” And Tom doesn’t just sell the coffee—he roasts it too. He also knows the farmers he buys the beans from and has traveled to the coffee farms in Southern Mexico himself. Heidi spends everyday at the shop, serving food and drinks, managing staff, and getting to know her customers. “I want it to feel like people are visiting in my living room,” Heidi said. A feat she has accomplished by simply spending time with the customers—getting to know them and their families while talking about her own kids and grandkids.

Watching Tom and Heidi, it’s easy to dream about leaving the cold of Mammoth winters to start a Looney Bean somewhere, anywhere warm.  “I’ve never missed the winter at all. I’ve never went ‘man I miss the snow’ ever,” Tom said. “I miss the people for sure. We miss our friends and our families.” Luckily, Tom and Heidi usually spend some time in Mammoth in the summer when the Looney Bean closes for the hot season. Tom helps out his son Kirk, who recently took over Lonsdale Masonry, and Heidi spends time with her kids, grandkids and friends.

Both Tom and Heidi aren’t quite certain what’s next, but they seem committed to Mazatlan for now. “We said we’d stay here for five years and here we are at seven,” Heidi said. “So I don’t know what’s going to happen.” Tom promised they’d stay in Mazatlan another five or six years, at least until their youngest girls are finished with high school. “We’re still poking around at it. We’ll see where it goes in the future.”