“We try to use every piece of equipment at least once,” Johnson said. “You know, you do what you can and when you get tired you give up,” Wells chimed in.

Before working out at the Center, Johnson and Wells really didn’t go to a gym or use any types of machinery for fitness. “We prefer the outdoors. In fact, we spend a lot of time wandering around these mountainsides and in the desert,” Johnson said. “We do a lot of climbing around the different gullies and mountains. We walk a lot.” 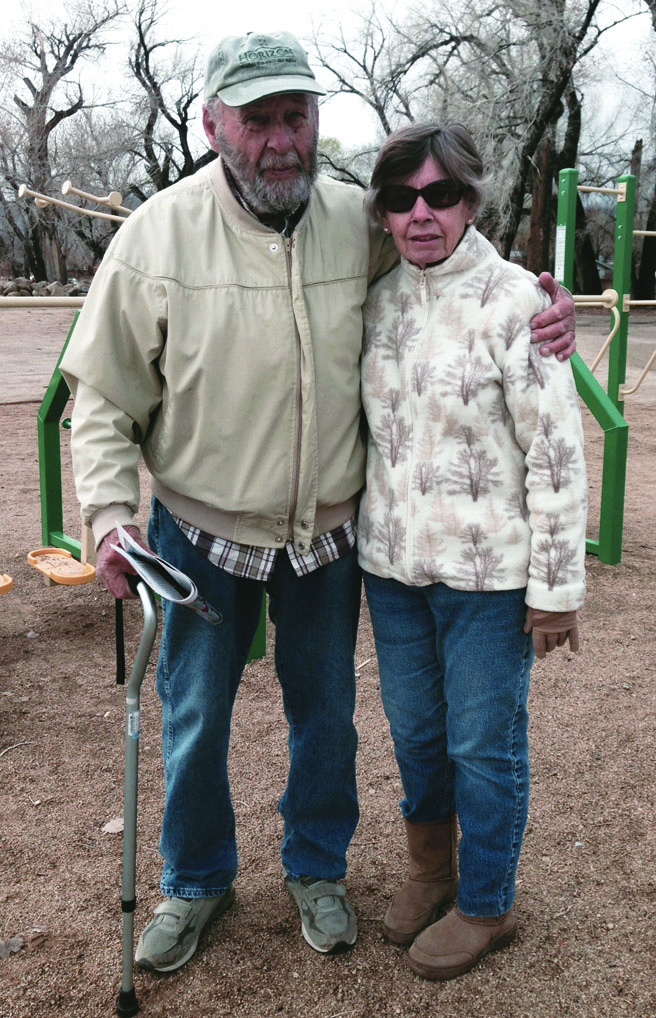 Johnson has lived in Bishop for more than 34 years. “I had been here in 1957 and I had been fishing. And I thought when I retire, this is the place,” he said. He grew up in Northern Minnesota during the Great Depression before enlisting in the Marine Corps in 1943. Through the Marine Corps and before his deployment to the South Pacific during WWII, Johnson came to California. “I decided that’s where I’m going to live some day, so that’s how I wound up here. It was a good move.”

After leaving the military, Johnson was in law enforcement in Downey, Calif. for 30 years. The last five years of his career, Johnson worked undercover: “We went wherever the crook took us, we followed them. Whatever it took to get them to jail. It was interesting,” said Johnson.

“Life is quieter here. I like [Bishop] because its slow-paced, honest people, friendly. And what can you say about the setting? It’s number one. All kinds of history to explore.” Johnson and Wells have kept a 4-wheel drive vehicle and use it to discover the surrounding areas. “We have no problem driving 200 miles in one day or just 10 miles. Wherever we find something of interest.”

Wells and Johnson discovered the public exercise equipment about five months ago. “We’ve used [the Center] since we first saw it there and observed it was open to the public,” Johnson said.

The Outdoor Exercise Center opened April 6, 2013 as a joint project between the City of Bishop and Toiyabe Indian Health Project. Toiyabe purchased the equipment and paid for the installation. The City provided the land and is responsible for the Center’s upkeep.

“The City goes by there everyday and they clean up,” Johnson said. “But people go and they vandalize it and they think nothing of going to [Jack in the Box] and getting a bunch of hamburgers or something and they throw the stuff on the ground and there’s a trash can right there.”

“It’s good strong machinery that they have set up and they went through a great deal of trouble,” Johnson said. “But two of the outfits are frozen for some reason. They are supposed to be moveable and they are not. I suspect somebody vandalized it.”

Johnson and Wells plan to keep using the Center everyday, even throughout the summer. “It depends how hot it is but probably, we’ll be out there,” Wells said. “It’s really a blessing,” Johnson added.

“I’m still here,” Johnson said about maintaining a healthy lifestyle at his age. “Not anxious to go yet.”