“North of the Sun,” winner of the Grand Prize and People’s Choice awards, includes a dose of arctic surfing.

It’s time for The Banff Mountain Film Festival World Tour in the Eastern Sierra. The traveling Banff Film Festival is an opportunity to view great films about adventure, mountain culture, and the environment, as well as an opportunity to reconnect with people. It has a bit of a tribal gathering feel, with old friends finding each other. Twenty years ago, Brad Rassler and I were sitting around brainstorming events that we thought would be appreciated here in the Eastern Sierra. Brad said, “How about the Banff Film Festival?” And here we are.

This year’s showings are Friday and Saturday, March 28th and 29th at Charles Brown Auditorium at the Tri-County Fairgrounds in Bishop. The films start at 7 p.m., with different films each night. The event is sponsored by Inyo Council for the Arts. Tickets are available at Inyo Council for the Arts at 137 S. Main; Eastside Sports at 224 N. Main Street in Bishop; and at the Booky Joint in Mammoth Lakes in the Vons Center. 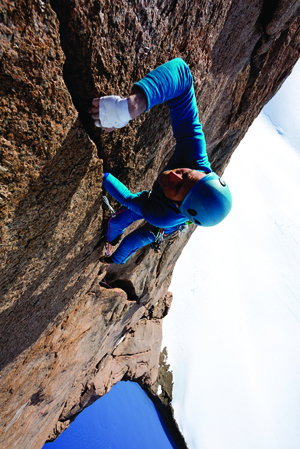 The Banff Film Festival returns to the Tri-County Fairgrounds in Bishop next weekend. For more, see p. 12. Above: A shot from “The Last Great Climb,” winner in the climbing category for Best Film.

This year’s program includes five prizewinners, including the Best Feature, Grand Prize, and the People’s Choice. The Grand Prize and People’s Choice winner is North of the Sun, the tale of two young Norwegian men who discover their own private playground tucked between the cold Atlantic Ocean and the rocky slopes of a remote arctic island. They build themselves a cabin from flotsam, clear the beach of debris, and spend the long winter skiing and surfing in the haunting low light. Surfing in the arctic winter looks cold, and you might want to bring your big down jacket for this one.

The Special Jury Award is Keeper of the Mountains, the story of Elizabeth Hawley, who bucked the convention of her time by settling alone in Kathmandu in 1960, where she began chronicling Himalayan expeditions for the Himalayan Database. Even as she turns 90, she continues to update these records with rigorous accuracy and dedication. Watching Elizabeth interrogate young hottie mountaineers is priceless.

The Last Great Climb, with Leo Holding, won the Best Film-Climbing award. This is a first rate climbing story of Leo and friends on a remote spire in Queen Maud Land, Antarctica. The big unclimbed Ulvettana Peak is their goal. But they are in the middle of nowhere, miserably cold, and a bit delirious; nothing a little adrenaline can’t cure.

The Best Feature-Length Mountain Film award went to Ready to Fly, the story of Lindsey Van and her 15-year fight to achieve equality in the Olympic Winter Games. It is the story of a woman who battles massive obstacles, not only to achieve her dream, but also to help change things for other women. It’s an emotional and triumphant journey. Bring your daughters.

The final prizewinner is The Best Short Mountain Film, 35. The film chronicles 35 routes in one day, celebrating 35 years of life.

Sufferfest is this year’s Alex Honnold entrée in the buffet of films. Alex and Cedar Wright bike to climb all of California’s fourteen thousand foot peaks. The title says it all.

There are also ski films, kayaking films, biking, environmental, rock climbing and stand up paddleboard films. Hopefully something for everyone.

As usual, the net proceeds go to our sponsoring organization, Inyo Council for the Arts, to support many programs including school programs and the Millpond Music Festival.

Thanks for all of the support for the last 20 years, hope to see you there!