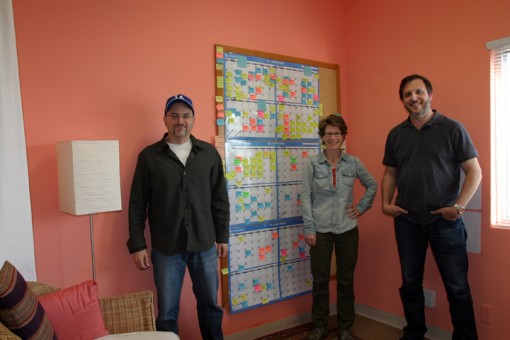 Ever feel like owning a piece of a movie?

Well, the filmmaking team of Shawn Tolleson and Gregory Lemkin have got a deal for you.

Tolleson and Lemkin (who are married) just began crowdfunding for a film, “Saturn Returns,” which was written by Tolleson. It is scheduled to be shot in Mammoth over a three-week period this June.

Tolleson describes the movie as a Big Chill meets (500) Days of Summer, a tale of six college friend on the cusp of their 30th birthdays which she penned as “a love letter to Mammoth Lakes and the Eastern Sierra.”

The Sheet’s Clouds McClouds says the Saturn Return is the approximate time it takes Saturn to orbit the sun … approximately 30 years. So at age 30, Saturn would be returning to the same location where it was at one’s birth. Supposedly, at this juncture, a person transitions into adulthood.

Sarah Drew, who has a recurring role on the ABC series Grey’s Anatomy, is attached to the project in a starring role.

Sheet: I imagine that’s good for you [that Mom’s Night Out will raise Drew’s profile].

Tolleson: That would be an understatement

Tolleson and Lemkin are both film industry veterans. Tolleson currently has her own business, Strategy Coaching, working as a career coach in the entertainment industry. Lemkin works in television as a visual effects supervisor.

Anselm Clinard is the third co-producer.

Among their credits, Lemkin co-wrote and directed the film “Shapeshifter,” a horror film released in 2005, and Clinard production managed the 2009 film “Angel of Death.”

Saturn Returns has a $350,000 budget. The producers are raising money through the sale of $10,000 shares as well as via a crowdfunding campaign launched on Wednesday through indiegogo (www.indiegogo.com) for those who wish to invest in lesser amounts.

To keep within that budget, the producers have cast on-the-rise television stars whom they believe will bring their own fan bases to the film.

When Tolleson gives her pitch, she doesn’t just talk about what the film can do for the investor, because, let’s face it, even the best films are a risky investment. So what she also talks about is what a film might be able to do for the broader community.

With her film, she hopes to produce a “Sideways” effect for the area. She said Alexander Payne’s film “Sideways,” about two buddies on a road trip to the Santa Ynez wine country, was such a hit that it allowed Santa Ynez businesses to capitalize on increased tourism to the area.

One immediate beneficiary of the shoot may be to Sierra Nevada Resort, as the producers and G.M. Brent Truax are in the process of working out a deal to house cast and crew.

Meanwhile, Lemkin was upbeat about a deal the producers have reached with Moonrise Pictures for sales outside North America, which he described as an “auspicious beginning.” Most film projects do not have foreign distribution lined up so readily.

While the film business is fraught with uncertainty, moving parts, etc., Tolleson wouldn’t have it any other way.

“You do it not because it’s rational. It’s a sickness. An obsession,” Lemkin said of his lifelong love of film.

Learn more about the crowdfunding campaign and more at the project’s website.