The Mammoth Fun Shop finally opened its doors on Thursday April 17 on the Main Street Frontage Road next to Mammoth Mountaineering. Owners Camille and Brant Miller have spent the last two years completely renovating and updating the building, which sat empty for several years prior.

“The idea was to create a whimsical, magical store with hidden treasures throughout,” Camille said, pointing out the occupancy sign that mentions dragons and elves, along with people. “There are lots of things that you wouldn’t expect – like giant pinwheels.” 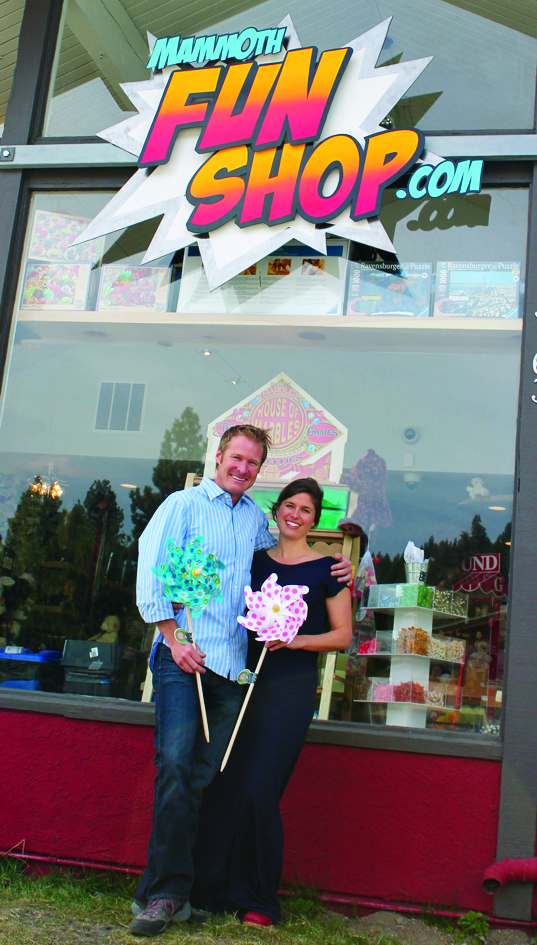 The featured ice cream is “Granddad Miller’s Vanilla,” named after Brant’s grandfather who grew up in Texas during the Great Depression, and got a vanilla ice cream cone once a year on his birthday.

“His entire goal in life was to buy as much vanilla ice cream as he could,” Brant said. Brant’s grandparents bought a condo in Mammoth in 1950, and Brant has been coming here his whole life.

Camille and Brant, both originally from San Diego, moved to Mammoth themselves nine years ago, and have owned the Fun Shop building for 8. “We’ve had a lot of potential tenants, but back then, when the town was not as business friends, nothing really worked out,” Brant said.

“We decided to turn the lemons into lemonade,” Camille said. “It was a huge learning process and the people at the town worked really hard to overcome the obstacles.” The Millers are hoping the building will become a proto-type for other renovations on Main Street. “You can do a lot with you have without having to build something new,” Camille said.

Camille and Brant have involved their kids Sage, 9, and Brooke, 6, every step of the way— from meetings with the town, to inside demolition and toy testing. “It has been the world’s largest homeschool experiment,” Brant said.

The Fun Shop opens at 11 am every day, except Wednesdays.