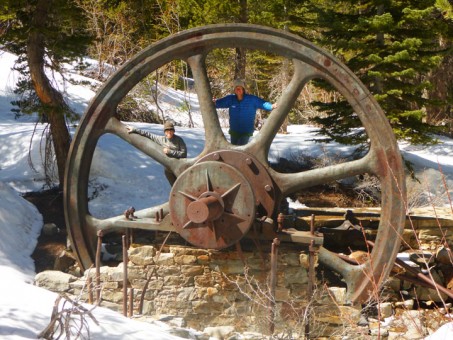 According to a press release earlier this week, CalTrout and the U.S. Forest Service (USFS) have detected elevated levels of mercury, lead, and arsenic in and around Mammoth Creek. The agencies discovered elevated levels near the historic Mill City Stamp Mill, a former gold ore processing facility about a mile east of Twin Lakes that ceased operating in 1880.

In 2012, CalTrout received a grant from the Lahontan Regional Water Quality Control Board to monitor water quality in Mammoth Creek. The study revealed elevated levels of mercury in Mammoth Creek, with the highest concentrations at the historic Mill City Stamp Mill.

These findings revealed five out of eight sites near the Stamp Mill with mercury levels above the Environmental Protection Agency (EPA) Human Risk Management Criteria (HRMC) for mercury of 40 parts per million (ppm). The five sites ranged from 40.83 – 210.49 ppm, according to the USFS Preliminary Assessment.

Meanwhile CalTrout’s study of Mammoth Creek detected mercury in elevated concentrations at six sites along the Mammoth Creek corridor near the Stamp Mill, down to the Hwy 395 Gauge. These levels rose above the Lahontan Regional Water Quality Objective of 50 ppm in June and July.

“Based on the data gathered thus far, I think it is prudent to conduct a more in-depth study to more accurately determine the potential scope and extent of the mercury in the Lakes Basin and particularly the Stamp Mill area,” said CalTrout Eastern Sierra Regional Manager Dr. Mark Drew. However, Drew stressed that these are just preliminary findings, and that there are more questions that need to be answered before CalTrout and the USFS can determine appropriate next steps for the area.

One thing both CalTrout and the USFS do know for certain is that these findings “seem to be linked to the Stamp Mill,” said Schweizer. “The highest reading was taken directly at a [mill] tailing.”

Arsenic and mercury are bi-products of mining operations, she explained; arsenic is naturally occurring in the rock, which was crushed to extract gold ore, while mercury was used during the gold extraction process throughout California from the nineteenth to early twentieth century.

According to CalTrout, an estimated 52 million pounds of mercury were used for gold mining efforts across California; 3-8 million pounds were lost to the environment.

This spring and summer, the USFS will conduct further investigation to determine the nature and extent of the contamination, sampling soil, water, and sediments in water, Schweizer said. Based on the data collected, the USFS will put together a recommended course of action.

“This might constitute some removals,” Schweizer said, “but that really depends on what we find. We have a very limited data set at this point.”

Drew emphasized that, in spite of limited data, “there is no concern with respect to the Town of Mammoth Lakes domestic water source.” The Water District not only treats all of its water, but also diverts that water at Lake Mary, upstream from the Stamp Mill location.

Meanwhile Schweizer emphasized the desire of the USFS to get even this preliminary information out to the public. “We know that this is a popular area for recreation,” she said.”