TreePeople President Andy Lipkis had an intriguing proposition to present to locals at his Mountain Light Gallery lecture in Bishop on April 14. Lipkis’ suggestion: Los Angeles could one day use as much as 50 to 70 percent, rather than the current 11 percent, of its own local water, versus poaching it from the Eastern Sierra.

Such an idea has positive implications for both Inyo and Mono Counties, considering the Los Angeles Department of Water and Power’s (LADWP) hundred-year reliance on our local water.

According to its website, “TreePeople is an environmental nonprofit that unites the power of trees, people and nature-based solutions to grow a sustainable future for Los Angeles.” Lipkis founded TreePeople at the age of 17 in 1973, when he embarked on a fundraising campaign to purchase sugar-pine seedlings to be planted at local L.A. summer camps.

The organization now employs a staff of 40, and works on multi-million dollar (as well as small-scale) projects related to citizen forestry, environmental education, and sustainable solutions to urban ecosystem problems.

Given Los Angeles’ record drought year this past year, one of TreePeople’s primary missions it to change the way Los Angelenos view water. 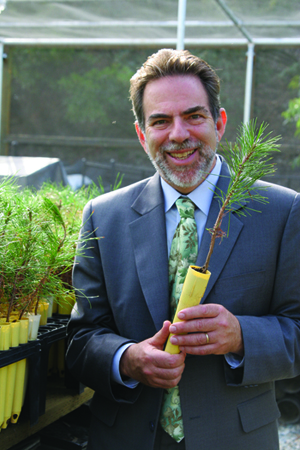 Los Angeles doesn’t need to lose that water, Lipkis argued. “L.A. is now two thirds paved,” he said. “We created a desert that wasn’t there, so that when it rains, it runs off … We replaced trees with bureaucracy; water with a flood control agency.”

Lipkis said that TreePeople’s goal is to show that rainwater reclamation “is technologically, economically, and socially feasible.”

He noted that TreePeople recently entered into a partnership with the Los Angeles Department of Water and Power (LADWP) to begin rethinking how the city uses, or fails to use, rainwater. According to a TreePeople press release, “LADWP has committed to capturing rainfall and implementing stormwater and watershed management programs throughout the city with a Stormwater Capture Master Plan.”

The Plan will allow both agencies to learn just how much water can be captured, as well as target the best areas of the city for capturing rainfall.

The DWP offers more information on the Plan on its own website, describing its effort “to reduce our reliance on higher cost imported water.” According to TreePeople, the DWP currently imports 90 percent of its water. Imported water comes from the Colorado River, Sacramento River Delta, and, of course, the Owens Valley.

The DWP seeks to change this by creating large scale stormwater capture projects like new and enhanced spreading grounds, and smaller scale projects, such as green streets, rain gardens, and rain barrels.

“It’s time to equip an army to radically change our behaviors, from wasting so much water, to becoming water stewards,” Lipkis said.

He pointed to one of TreePeople’s success stories, a large-scale sustainable watershed management demonstration project in Sun Valley. The nine-mile watershed “floods whenever it rains,” Lipkis said. “It’s a low income area, with no storm drains.”

In the late 1990s, TreePeople urged the L.A. County Department of Public Works to divert $42 million from a proposed storm drain project into retrofitting the watershed instead. TreePeople convinced Public Works of the validity of this alternative, and ended up with a budget of $200 million, Lipkis said.

The project included the installation of an infiltration gallery under the street that cleans rainwater and returns it to the aquifer; new roofs to redirect rainwater from driveways into cisterns; and a retrofitted Sun Valley Park (completed in 2006) that treats stormwater and redirects it to two large infiltration basins, where the water is filtered before recharging the aquifer.

Lipkis said that this project represents just one example of how L.A. can change its water use. With the tools employed by the LADWP Stormwater Capture Master Plan, he said, L.A. could generate 30 percent of its water locally within the next 10 years. Lipkis added that be believes 50 to 70 percent would be possible soon after that.

One audience member wondered how TreePeople had gotten the DWP to the table, considering the long and contentious history between the DWP and Inyo and Mono Counties.

Lipkis had a simple answer: “One of the things we did is we started to get sympathetic,” he said. He added that not just the DWP, but also any other agency involved in providing services to L.A., believes it has to keep doing things the way it always has, or else risk endangering the public. “Their perspective is that people won’t change, and that if they don’t supply [their service], they go to jail,” Lipkis said. He quoted one agency member as telling him that, “‘We want to change, but we can’t. We don’t want anyone to die on our watch.’”

Lipkis said that in order to persuade these agencies, TreePeople has learned to find the people that the agencies believe in the most; “engineers, architects, and landscapers.”

TreePeople has also learned how to prove to agencies like the DWP “that [our projects] are affordable. They wouldn’t talk to us at all until we did that,” he said.

But the drought, and the threat of climate change, is also changing how willing agencies are to discuss alternative projects with TreePeople and with each other. “Things are changing day by day,” Lipkis said. “They’re waking up … They’re playing a very different game.”