Folks gather at Stellar Brew for the yOUR place art show.

Fifteen local artists displayed their work at Stellar Brew on Monday night during the yOUR Place art event. Over 200 people came out to support the artists, drink Sangria and beer (at a discounted price if they had their own cup), and listen to live music.

“We have this place in common but we experience it in different ways,” Chelsea Taylor, the event organizer, said. “[The art show] is a way to celebrate what we have and celebrate each other.”

Taylor worked on a trail crew in the area last summer and decided to move to Mammoth more permanently in November. She works at Campo Restaurant. 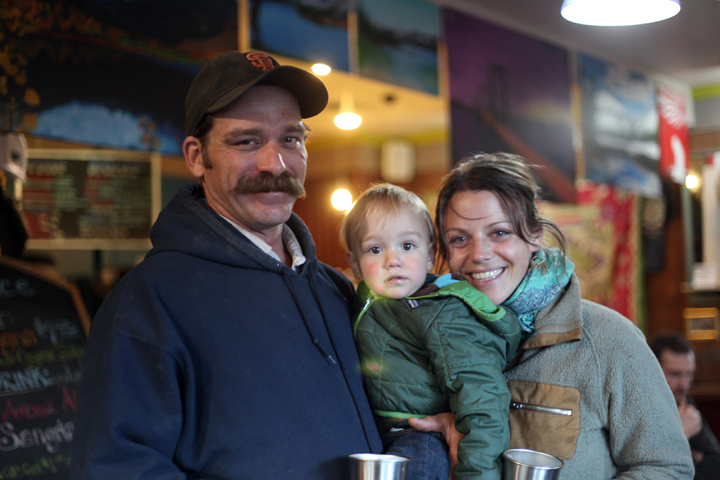 Technically this was the second yOUR place event; the first one was held in Taylor’s apartment in Chicago with nine artists. “Some folks here suggested I talk to Andrea [Walker, owner of Stellar Brew] about doing something similar here,” Taylor said. “The art scene in Mammoth isn’t as obvious as it is in cities like Chicago, but it’s here.” 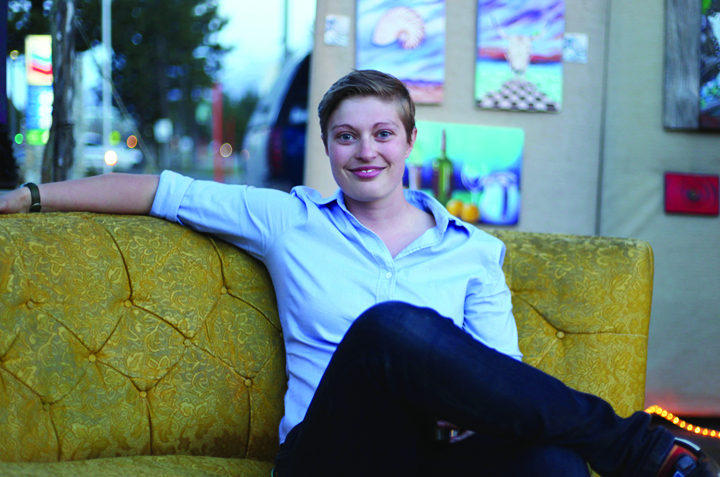 The event grew organically after Taylor contacted local artist friends and the crew at Stellar Brew. “It was just sort of word of mouth,” she said. “I even had a few people who hadn’t contacted me show up to display their work.” Taylor also connected with the Mono Council for the Arts, which donated the display panels and easel’s to accommodate all of the artwork.

Artist Lana Rae Hansen was asked to participate in the event by Walker. “This is awesome because the only art scene we really have in town is of mountains and fish,” Hansen said. “Which is great, but this type of event brings the community together around different types of art.”

Hansen, 28, was born and raised in Mammoth, then studied Art at UC Santa Barbara before moving back to the Eastern Sierra. “I am really excited to be a part of this because I know there’s a lot of local talent here in Mammoth that others, including myself, don’t know about,” she said. “It’s awesome for all of us to get together and meet, and to get our names out there. We need more of that in Mammoth.” 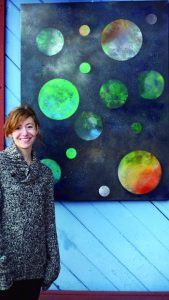 Local Danielle Wynen, currently studying online through the Academy of Art University, agreed: “Events like these allow you to meet other artists in the community. Artists need other people.” Wynen has displayed her art at Stellar Brew before, although in such a small community, displaying your art can be a nerve-racking and vulnerable experience. “Art is like a mirror,” Wynen said. “As an artist, you connect to your piece and then other people project their own ideas and experiences onto it. But it’s exciting because you have to let that piece go and let people interact with it.” After studying the vast history of landscape art and photography in the Eastern Sierra, Wynen said: “It’s cool to see people responding to our area in a different way and making something new.”

Bruce Medhurst displayed his caddis fly case art for the first time in public at the event. Medhurst is an ecologist who works for UC Santa Barbara at SNARL. He focuses on stream and river ecology and spends most of his days looking at caddis fly cases under the microscope. He began arranging these fly cases in specific patterns and designs in shadow boxes as gifts for family and friends. “It’s just kind of a hobby,” Medhurst said. But when he saw the yOUR Place flyer up at the Post Office he decided to display his art. “It’s a cool project for me,” he said. “And it’s a way to strike up a conversation about ecology.”

Taylor praised Walker and the crew at Stellar Brew for hosting the event, working extra hours, and keeping costs minimal by not charging venue fees. Walker, who regularly displays local art in the coffee shop, expressed her desire to host this event four times a year.

“It seemed like the response was great,” Taylor said. “I predict something else will happen in the future. Folks seem empowered to do something on their own, too.”