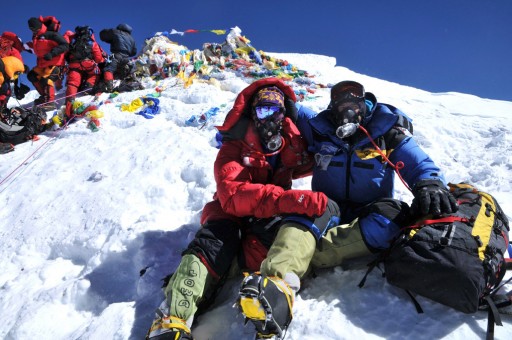 As of this week, scores of Sherpas and climbers are abandoning Mt. Everest out of respect for the 16 Sherpa guides killed in an avalanche on April 18. The event was the worst tragedy in Mt. Everest’s history. 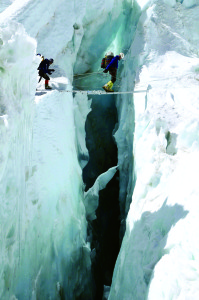 The guides had been setting up a route for climbers to follow through the dangerous Khumbu Icefall, when a wall of snow broke free from the hanging glacier above them and came crashing down.

13 Sherpas have been confirmed deceased; the other three are missing and presumed dead.

This tragedy comes at the beginning of Mt. Everest’s climbing season, which promised to be a busy one. According to the Himalayan Times, the Nepalese government issued permits for 334 mountaineers representing 31 teams. Meanwhile, more then 500 support staff had already arrived in the Khumbu region to prepare for these summit attempts.

Permits for Mt. Everest cost about $10,000 per person. Yet the families of Sherpa guides injured or killed on Mt. Everest receive only about $400, according to the BBC. That’s about equal to the mean annual per capita household income in Nepal of $430 for 2010-2011.

On average, Sherpa guides earn about $5,000 per year; more than ten times that mean per capita.

In the wake of the tragedy, Sherpas are threatening a boycott. The BBC reported that Sherpas are demanding the Nepalese government provide $103,600 to the families of the injured and deceased, “along with initiatives to increase the overall support infrastructure for local guides working in the Himalayas.”

According to Grayson Schaffer, a senior editor and writer for Outside magazine, 174 climbing Sherpas have died while working in the mountains in Nepal. In the past decade, 15 have died on Everest alone.

At least as many Sherpas were also disabled by rock fall, frostbite, and altitude-related illnesses like stroke and edema, during that time.

Said Shaffer, “A Sherpa working above Base Camp on Everest is nearly 10 times more likely to die than a commercial fisherman — the profession the Centers for Disease Control and Prevention rates as the most dangerous nonmilitary job in the U.S.”

The Sheet spoke to Sierra Mountaineering International (SMI) Founder Kurt Wedberg, who has summited Mt. Everest three times, for his perspective on both the tragedy and its possible ramifications.

He noted that the Mt. Everest climbing scene has changed a great deal since 1995. Until a decade ago, 334 permitted mountaineers would have been a large number. “The number of mountaineers has increased over the years,” he said.

This is because of increased accessibility. “Historically, if you wanted to climb Mt. Everest, it took you years of climbing — getting more experienced — to go to a place like that,” Wedberg said. “Then you had to find other people with the same dedication. In 1995, me and a bunch of friends spent two and a half years just planning it.”

In recent years, he said, large companies have begun to offer guiding services for groups. The companies buy a $100,000 permit and offer $10,000 spots to interested mountaineers.

“Now you can just find one of these companies, write a check, hop on a plane, and go,” said Wedberg.

With increased visitation comes increased demand for Sherpas. Also new in the past decade are Sherpas who don’t just fix lines or carry loads to higher camps, but also act as guides, he said.

One of the most dangerous parts of the climb is the Khumbu icefall. “The longer you spend in those areas, the more you’re exposed to that danger,” Wedberg said. And because Sherpas must fix ropes and haul gear, they traverse areas like the Khumbu icefall several times to each time a Westerner crosses through them.

Wedberg, who only guides one-on-one, with the help of Kancha Nuru Sherpa, has never had any injuries on Mt. Everest thus far. “You can’t eliminate risk, but you do what you can to minimize risk,” he said.

When asked why mountaineers are drawn to the mountains, particularly considering that inherent risk, Wedberg replied that there are many reasons. “Some people enjoy being outside; it revives the soul, and is very rejuvenating to the spirit,” he said. For other people, it’s a physical challenge. For still others, the companionship is most important; assembling the right team of people to tackle a peak.

“There are also some deep, spiritual reasons people climb mountains,” he said, “and some you couldn’t even put into words. I think they’re that intimate.”

Wedberg recalled the first time he summited Mt. Everest. “It was a pretty overwhelming experience, and actually, it’s been that way every time,” he said. “When you finally reach the summit, standing on the top, you realize for that instant you’re the highest person on the planet … I got up there and started crying.”

The challenges of such an ascent are many; including the fact that you have only 21 percent of the oxygen you would have at sea level by the time you reach the summit. “You end up taking four to six deep breaths for every time you take one step,”Wedberg said; “that’s how slow you’re moving.”

Given how integral Sherpas are to this grueling journey, Wedberg agreed that they could receive greater insurance compensation from the Nepalese government, should they be injured or killed while guiding. Although Sherpas make a good wage for that part of the world, “You can do the math, how much the government is making off those permits,” he said. “I think the government could offer more.”

Moreover, “If I was one of those big companies, I would want my Sherpas taken care of,” he said. “If they need more money, or whatever it takes, I’m making an investment in them to make sure they stick around.”

As for the tragedy itself, Wedberg said it was a case of the Sherpa guides being in the wrong place at the wrong time. “You have that big, hanging glacier there, and it’s been sitting there year after year, spitting big chunks of ice down … If you’re going to Mt. Everest, you’re going underneath that thing. Eventually, it’s going to fall,” he said.

“Unfortunately, it is something that just happens.”