The local rock-climbing community learned how to prevent injuries from Physical Therapist Julie Perumal at Black Sheep Coffee Shop in Bishop on Monday, June 9. Perumal has been rock climbing for ten years and has lived in Mammoth for the past four years, working as a PT (Physical Therapist) at Mammoth Hospital.

“Julie had talked to us awhile ago about putting this together. And climbers being perpetually injured and an out-of-whack group of people it seemed like a great idea,” said Andrew Schurr from BACC. “Summertime is kind of the off climbing season at least for people down here so it’s a good time to do some rehabbing.”

On Monday, Perumal went through a slide show about several different kinds of injuries climbers commonly experience including finger, wrist, and shoulder injuries. Perumal said that most injuries occur in the upper extremities but briefly covered ankle injuries as well.

The most common injury for climbers is tendinitis, which occurs when “the muscles get stronger than the tendons,” Perumal said. She advised climbers to warm-up before starting to climb or boulder. “We don’t all jump up to our most difficult projects right away,” she said. “Cardiovascular warming up gets the blood flowing to the tendons.” A good alpine approach to a particular climbing area can be enough. 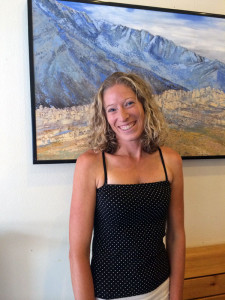 Perumal also emphasized the need for cross-training in order to prevent injuries while climbing. “Think about working all the other opposing muscles,” Perumal said. “We’re all active people here so I’m not too worried about the cross training but in the middle of your season do a lot of stretching and cross training to prevent injury. Don’t just climb.”

Perumal admitted that climbing is simply hard on the body: “The harder we climb the more stress we put on ourselves. We all are not going to stop climbing but we just have to realize what we’re doing and what stress we’re putting on our bodies.”

Dr. Richard Meredick, an orthopedist surgeon at Northern Inyo Hospital, was also in the crowd and agreed with Perumal. “We put enough stress on our bodies over time. A lot of times when we have overuse issues like tendinitis you have a predisposition to injury,” he said.  “Pay attention to your body— if it’s telling you not to climb, listen to it.” Meredick, who also rock climbs, said he has seen several climbers for injuries since he started at NIH in January.

Perumal stressed over and over again the need for climbers to rest when injured and take care of their bodies. She told the group at Black Sheep to “discipline yourself to take a break,”  “nothing can heal in a week,” and “the more you can stretch out the tightness throughout the day, the less tight you will be at the end of the day.”

After her presentation, Perumal admitted. “All patients need to rest but climbers are notorious for having a hard time resting.”

BACC is a loosely affiliated group of climbers in Bishop who work on a volunteer basis representing the climbing community in the Eastern Sierra to the local towns and the broader visiting communities. The Coalition was formed in 2012 when there was an access issue out at the Tablelands after a big party that damaged some petroglyph sites and boulders. “The inception of the [coalition] kinda came around that issue and it grew from there to become more of a sustainable organization,” Schurr said. “There have been several organizations in the past that have come and gone and the whole goal with the coalition is to build something with lasting power and can handle transition of personnel.”

Schurr said the coalition sponsors several climbing area clean-up days and communicates with the land managing agencies such as the BLM and the Forest Service. There is no formal membership but BACC is affiliated with the Access Fund as a local climbing organization. “We want to get people out and involved so that they can have some ownership over the land and understand that it’s a natural area that deserves respect,” Schurr said. “Our main goal is to be a voice for the climbing community and build community within a very disparate and independent kind of culture, within the small cosmos of the Eastern Sierra.”