Last Sunday, I was entertaining friends from out of town when my phone rang. It was Kelly from the Eastern Sierra Wildlife Rescue Center  (ESWC) calling. As a volunteer for the center, I knew someone had found an injured animal that needed help. I am one of 15 or so active animal care volunteers in a network that stretches from Lone Pine to Bridgeport. So far that week I had received calls to pick up two infant Swallows and a baby Blue Jay, that had all fallen from their nests. I also got a call that two women had found a young Rock Squirrel that was apparently disoriented, and floundering on the side of a road. I transported them all to the Center at Keoughs Hot Springs for emergency care. The birds are going to survive, but the baby squirrel died due to poisoning. It’s baby season in the Eastern Sierras and it’s a busy time of year.

Kelly told me that a young Bald Eagle had fallen from its nest and they needed someone to go check it out. So I got some gear along with a large dog kennel and headed out. I will admit that my adrenaline was pumping. My imagination was running wild on me. If it fell from the nest then that meant that there were big grownup Bald Eagles in the area. I brought my snowboard helmet along just in case. I had a vision of a pissed off mother eagle grabbing me by the head and flying off with me. The helmet would prevent that from happening I thought…but I wasn’t sure. 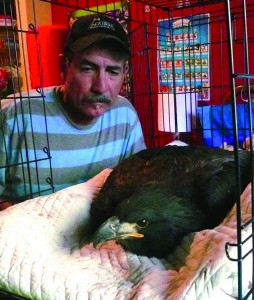 When I arrived on scene, there were a group of concerned neighbors, standing nearby where the eagle was on the ground. They were aware of the nest and a few of the neighbors had actually been watching the nest when the youngster lost it’s balance and fell a hundred feet or so to the ground, hitting branches on the way down. So there it sat, or laid, on the ground under a small pine tree. It was hard to tell whether it had been injured or not and although this was my first eagle rescue, I instinctively knew that it would not be a good idea to try and turn it over to check it out. I’m smart like that.

The gentleman that called the center told that me that the Fish and Game warden was on his way and that the bird was not to be removed until he got there. As I waited, I could see the parents up at the top of the tree. There was also another young eagle up there with them.

A few minutes later Todd Estrada from Fish and Game arrived. He determined that the bird should be ttransported to Cindy Kamler at ESWC. Some stealth planning and a few blankets later and the young eagle was secured in the cage. Now mind you, although it was young, it was not small. It was about the size of a Cocker Spaniel and with its wings spread, it was probably about 6 feet wide.

It was about 8:30 in the evening by the time I headed back to my house. Cindy told me to keep the bird overnight and bring it to the center in the morning. When I arrived home, my wife Julie helped me carry the cage into the guest bedroom. I made up some Arnica solution and got some of it down his throat. I’m not going to go into how that all went. That’s a chapter in itself. So there I was with this Eagle in my house. I went over to my desk, got out my bucket list and crossed off, “Sleep Over With Bald Eagle.” Who would of ever thought? Then I turned off the light and closed the door.

I didn’t sleep well that night. Something was eating at me. I kept thinking back to a couple months earlier, around the beginning of May, when I had taken an injured Rough Legged Hawk out to Cindy. We were standing on the deck talking and I noticed that there was something off. I asked Cindy if everything was okay. “Not really,” she said. “A few of our key contributors have dropped out. We are looking at a serious situation. Our budget is $100,000 a year to keep the center open. We’re not going to make it. I don’t know what we’re going to do.” I was alarmed. I had no idea how much it cost to pay for staff, supplies, care and everything else.

So there I was with this beautiful eagle that needed much more than I was able to do for it. What would I, or anybody do, if the center were to close its doors? Then what? So many magnificent animals would die due to injuries and illness that didn’t have care available. That’s what prompted this article.

I have a couple ideas that I want to pass on to readers. First of all, please add a new contact in your phones. Enter “Wildlife Center”/760.872.1487. A lot of people don’t know whom to call when they find hurt wildlife. Second, I believe that if we can make our center known nationwide, and get people to understand, that our area here in the Sierra Nevada’s, which includes Yosemite, is a national treasure, as is the wildlife, maybe we can attract some philanthropists to contribute to our center.

One idea I had on how to do that was to post videos of some of our rescues on YouTube. So I created a channel called “Wildlife Mike” which you can find here: www.youtube.com/user/wildlifemikey. This will give folks a behind-the-scenes look at Eastern Sierra Wildlife Care and get out the word about the importance of the center.

On Monday morning, I drove the eagle out to ESWC and left it with Cindy. Initial evaluation showed no apparent injuries but there are other factors or possible injuries to consider that would require her to keep the bird for observation. 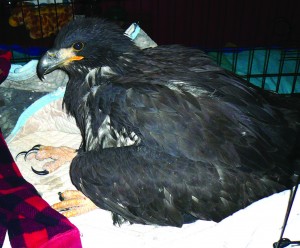 What I found interesting is that In the 30 years that Cindy has been taking care of wildlife in our area, this is the first time there has been a young Bald Eagle out of the nest, or “grounded,” that she has been called about. She explained, “It’s just never happened before until now.”

Apparently, the young eagle was “branching” with its sibling. This is when they hang out on branches near the nest and practicing flapping their wings to get strong prior to taking flight. They do this for three or four weeks ,staying close to the nest as a “home base.” During this time the parents begin to cut back on the feeding schedule. The young eagles begin to drop body fat, becoming stronger, lighter and hungrier. The reason to fly is based on hunger. Parents will sometimes fly nearby with a fish or small animal but not land, enticing the youngster to fly to get the food. A sobering fact is, 40% of young Bald Eagles do not survive the first flight.

An eyewitness at the rescue site said the eagle lost its balance and ended upside down holding on to a limb with one foot. After some time, and unable to right itself…it let go. It cascaded down through the branches until it hit the ground. It looked pretty traumatic which prompted the call to the center. It’s been written that the parents will tend to the bird and feed it on the ground until it eventually flies, but we didn’t know if it was hurt.

Another problem is the area where the tree is located. There are cabins, people and a dirt road that has occasional vehicles going up and down it. In other words, it’s not out in the wilderness. The other problem is predators, especially the ones that come out at night, like coyotes and mountain lions. I was told that there were actually three babies in the nest to begin with. One had fallen early on and died. Neighbors buried the chick only to find that it had been dug up by the following morning. So chances of survival on the ground are not good with the predators in our area. And I want to clear up a myth about birds. We have all come to believe that if you touch a bird, the parents will reject it because of human scent. NOT TRUE. So if you see and injured bird, help it.

UPDATE: It’s Thursday morning right before, a few hours before the paper will go to press. The eagle is okay. Experts have concluded that we need to get the eagle back up into a tree. Ideally it would be the main tree where the nest is, but sadly, it is too high and not accessible. We made contact with a local contractor, BZ Miller, who has an extending crane that retrofits an 8’ wide bucket on the front. It can reach up about 45’. There is a tree adjacent to the nesting tree that has been chosen to put the eagle into. We are going to take the cage with us up in the bucket and find a suitable branch. We will dress in leather coats and wear long leather gloves. It was strongly suggested by experts that were consulted, that we wear helmets in case the parents decide to attack. GREAT! While I have a snowboard helmet, I do not have a parachute. When we decide on a branch, we will take it out of the cage and attempt placement. What we don’t know is if it will work. From here, I suppose we will have to let nature take its course.

I’ve been leaving this piece for last. During our training session this year, the conversation came up about having to euthanize wildlife that’s too sick, or that have injuries that are beyond help. It just didn’t occur to me that Cindy had to deal with that too. She told us that there was a ritual that she did when that time came and then she told us about it,

She explained, “I hold the sick or injured animal close to me. Then I say these words…“I love you. I’m sorry. Please forgive me. Thank you.” Then I close my eyes and escort them through a beautiful landscape that leads to a tunnel of light. There, I release them into the light where their spirits will fly free.”

And so we ask, If you are visiting Mammoth, or live in the area, and you want to be a part of this work by helping us keep the center open, any contribution is greatly appreciated. You can donate online at www.eswildlifecare.org.

Note: The Sheet will offer updates to this story via its Facebook page as it unfolds.