Eight local artists will be displaying their work at Community Skis on Berner Street at an art show entitled “Beasties” on Friday, August 15 from 5-9 p.m. Laurel Stanford-Manning, owner of Paisley Fine Art, is cohosting the event and said, “It’s a group of us that get together and do art that we may not normally do. Our last theme was pushing daisies and we all did a show involving bones. This time it’s animals.”

The fliers describe the show as “a compendium of artistic interpretations of strange and fantastic creatures mostly from the Eastside,” leaving the reader curious about exactly what type of animals will be featured.

“About 10 years ago we started with a group we called Eastern Sierra Women in the Arts,” Stanford-Manning said. “Some members have left, others have been added. It is still all women. 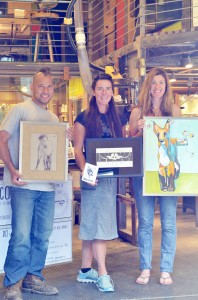 Standford-Manning said the group holds shows about twice a year, usually at Blue-Bird Imaging or in her old location in the industrial park. Her business recently relocated to Berner Street and Beasties is the first show they are holding at Community Skis.

“It is a great venue,” she said. “One of the most overlooked places in town. It’s inspiring in itself.”

Kristin Broumas and Michael Lish, co-owners of Community Skis, host two or three local events each month and open up their loft space and workshop to anyone who wants to hold an event. “We really try and embody our name and I think we have,” Broumas said. All events are free, with food provided by Broumas, “and we encourage people to bring whatever beverage they would like,” she said.

“Our biggest objective is to create a wonderful cultural event. Because we live in a small town, one of the big things we are lacking is the culture of a bigger city,” she said. “It’s something else to do besides going out to the bar or whatever people like to do in the evening. Just another option.”

Community Skis is an open loft with several smaller rooms accessed by large sliding glass windows. There are several separated sitting areas in addition to the larger area downstairs, which creates a unique venue. “It creates more of an intimacy for different conversations and different groupings of people,” Broumas said. “We really believe that the environment is so important to what you feel, how you think and the conversations you’re going to have, so being in this environment is really conducive to community.”

Broumas and Lish organize all of the events at Community Skis. They’ve had movie screenings, lectures, cooking classes, and kids art classes in addition to monthly art shows, and they held a weekly political series throughout the spring leading up to the June election.

“We love doing events, because honestly it allows people to know that we are here,” Broumas said. “It’s not about buying skis, just coming in and seeing what we’ve done here.”

At the opening of Beasties there will also be live music by the CruiseShip Volunteers in the parking lot and art will also be displayed at Paisley Fine Arts in the next building. Featured artists include Dana Ellis, Lana Rae Hansen, Kendra Knight, Taylor Kumlue, Lori Michelon, Margaret Palchak, Kristen Schipke and Stanford-Manning. The show is “an excuse for us to get out and share our art with the community,” Stanford-Manning said. “It’s just a fun kind of event that Mammoth doesn’t have many of.”