How one man got hooked on the sport.

That was me. For the longest time, I was Chris Knight. Me run? You must be kidding. Hiking, biking, skiing … I’ve got that. Running? Really, the thought never appealed to me much as a workout, much less a competitive outlet.

I’ve had my flirtations with it. When I was playing competitive tennis in college, our coach didn’t want us running long distances. He wanted us fast within the court lines.

During the late ‘80s and early ‘90s, I’d run the occasional mile or so around Orlando’s Lake Eola Park. I’d jog a bit now and then when I moved to Los Angeles, but I was never serious about it. Not like I am today.

Having just competed in my first ever road race, the Footloose 5K/10K on Aug. 3, I’ve run more this summer than I have perhaps in my entire life. What I never really considered was why.

When Lunch asked me what made me take up running more, I took that as a good opportunity to assess. And what I learned is there are a few reasons, not the least of which has to with, as do many things, the heart, and by that I mean not the figurative one, but the literal one.  A little history is in order.

About two years ago, I was diagnosed with Supraventricular Tachycardia, in which the heart beats irregularly, particularly faster than normal. Turns out that was due to a number of things. Stress, too much alcohol, way too much caffeine and about 25 extra pounds I didn’t need to be hauling around. And at 48 it’s not the type of thing one normally finds in someone that age, usually appearing in older people.

It bothered me. I hiked, I skied, and thought I was in reasonably good shape. And I might have been, relatively speaking, but things needed to change and so they did. After months of no caffeine, no alcohol, some diet tailoring and trying to relax more, I had lost the 25 pounds and felt better.

Soon I was skiing better and zipping along trails, actually sort of trail running. I was even zipping up snowshoe routes almost as if in a run. Feeling better. A lot better. My symptoms were not only gone, they were nowhere to be found.

You can see where this is going. At the time, though, I didn’t. 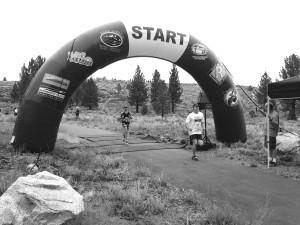 When thinking about the what, it occured to me to also consider the who. For starters, my cardiologist. He’s a runner.

Another factor: some of the folks I work with at Disabled Sports Eastern Sierra. Many of my colleagues there are into running triathlons and other competitions, and they are pretty hard core about their fitness and training. DSES staffers Cara Leonard and Maggie Palchak in particular talked with me a fair amount about their running as part of either a training regimen, or just a great way to keep in shape, one that they enjoy. And Kathy Copeland said she couldn’t be happier about my running.

As if that weren’t enough, I’ve been fortunate to meet some of the world’s best runners here in Mammoth Lakes, including Meb Keflezighi and Deena Kastor. They in turn have worked with other marvelous athletes who train here. I look to all of them for some of my inspiration, especially on days when I might need a little motivation.

All that started me thinking perhaps it’s something I should consider myself. After all, the medical community generally is united in its support of running’s obvious health benefits.

Okay, running guru Jim Fixx died of a heart attack while jogging and he was only two years older than I am now, BUT he also had atherosclerosis which had blocked one coronary artery 95%, a second 85% and a third 70%. I don’t. And that was 1984. Not only has running technology improved, so has our knowledge and awareness of what contributes to heart disease.

In any case, I’m in some of the best shape I’ve been in since college.

Bottom line: am I worried? Not really.

Well, I’m not taking it to that extreme, but a few months ago I bought my first pair of real running shoes and clothes, and decided to make my first few runs. At first, they were short, trial runs, pretty much jogs. But as the distances got longer, I felt better and better.

By the time I got to July, I was running a few miles at a stretch, and having been to the June Lake Triathlon and the Mammoth Marathon, was mulling the idea of training for the Mammoth Half Marathon next year.

It was my wife and biggest cheerleader, Pamela, who suggested I try the Footloose race. It’s a small one. I can do the 5K version, see if I like it and kick the tires, as it were. Good idea. I had recently met another local, Micaela, who ran with me in her first race as well, and the two of us had a great time.

Deena and her husband Andrew Kastor, who coaches LA Marathon and Mammoth Track Club runners, told Micaela and me at the Footloose race that the 5K is the perfect starter race. You want to like it enough to do it again. And they were right.

In fact, I’ve received nothing but support from the local running community. Everyone has been supportive and encouraging. In addition to my own basic research, experienced runners, such as Rick Wood, have given me several pieces of valued advice.

Now, I’m not Meb, nor will I ever be. That said, for my age, I like what running’s done for not only my physical health, but my mental state as well. I feel a great sense of adventure and accomplishment. I’m not trying to impress anyone, it’s just something I’m doing for my own benefit. For me, the race is between me and me. Seeing my times improve makes me happy. It’s that simple.

Now that I have my first race successfully behind me, I am also looking toward the future. Some of that advice I was given: having goals helps with training.

I’m now looking at joining the Mammoth Track Club, and running Ned’s Mammoth Rock Race later this month. Palchak and I are also eyeing entering the San Diego Half Marathon in March, and its companion race, the Mammoth Half Marathon in June. I also am the running leg of a relay team for next year’s June Lake Tri as well.

I interviewed Deena once and I remember something she said that has, interestingly, stuck with me. She said one thing that really gives her pleasure is seeing people out running, participating in the sport. Having exchanged high fives and waves with other runners, and experiencing the feeling of finishing a race, I get what she means.

I have no illusions of being a great marathon runner. I don’t know if I really want to run 26.2 miles. And I’m fine with that.

What I do know is that I feel like I’m part of something and doing something good. At 50, I might be finding the enjoyment late in life, but I’m liking it. A lot.

And I’m in it for the long run.