Community Skis has continued  to evolve since its inception in 2012. The custom ski-making business actually began in 2008, under the name 333 Skis, and was operated by owner Michael Lish out of a renovated trailer run on green energy.

In 2012, Lish moved the business to its current location on Berner Street, where he and co-owner Kristin Broumas embraced the opportunities presented by a brick and mortar business.

Lish, who has been working in factories for 30 years, said the space provided him with a chance to design the factory he’d always wanted to work in.

“Architecturally, I wanted to create a very unique space that communicates what we do,” Lish said. “We design beautiful things that perform.”

Community Skis has a strikingly modern interior, built of steel, glass, and repurposed materials (“down to the fireplace,” Broumas said). The lower floor contains small workshops for assembling skis, each workshop leading naturally to the next, while the upper floor contains a kitchen and office.

Of the emphasis on glass and open space, Lish said, “We wanted a translucent factory, where the client can have a sense of connection to the process.” Customers can either order their skis, or build them in “build your own ski workshops” the first and third Saturday of every month. This one-day workshop includes breakfast and lunch (normally $950, but this coming month, Broumas said it would be $700).

The build-your-own workshops are in keeping with Community Skis’ main emphasis: education. “We want to create a platform where everyone can come in and learn how skis are made,” Broumas said. 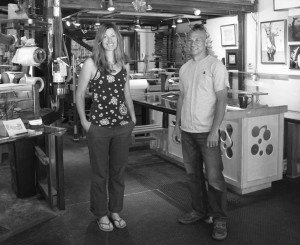 Lish said Community Skis also educates other small, startup ski-making companies. “We’re very accessible to questions,” he said. “We provide them information on everything from supplies to marketing.”

Although based locally, “Most of our sales are actually worldwide,” Lish said. “We just sent skis to Australia and Sweden.” Within the United States, Lish said customers have come from Colorado, Arizona, and, more surprisingly, Michigan and Oklahoma.

Customers quickly discover that “it’s so different, when you’re on skis you’ve made,” Broumas said.

Both Lish and Broumas found their way into the business of making skis by happenstance. Lish said his first exposure to making ski equipment came when a student at his Karate studio in the San Fernando Valley brought back a mono ski from Europe.

“My mother and I thought, maybe we can go into manufacturing,” he said. Two years later, snowboards came onto the market, and Lish founded Yama Board and Ski Company.

“About six years ago, I thought that it’s possible we might be able to make skis,” he said. When orders for skis started to boom, Lish knew he needed to take on a business manager.

That’s where Broumas came into the picture. A native of Maine, Broumas has a culinary background (which explains the delicious food at Community Skis events) and a degree in interior design.

“I moved to Colorado [after school], where I worked for an architectural firm,” she said. “I was looking for something that invoked a little more meaning in my daily life.”

When Broumas heard about the job opening at Community Skis, “I got in my car and came out to meet Michael … I ended up not leaving.”

While Community Skis is well respected for its products, locals are also learning the business offers some of the best events in town.

Lish and Broumas have been using Community Skis as a social and cultural space since they opened at the Berner St. location, hosting events to drive traffic, but also to fill a niche in town for free, communal events. Community Skis hosts everything from food nights, to candidate forums, to a lecture series that Lish said will include an upcoming talk by two German astrophysicists on dark energy and dark matter.

“Now that it’s an established venue, people are coming to us,” Lish said. He cited the example of the Beasties art show, which opened on August 15 and is currently on display. Broumas said the turnout for the art show, which featured eight local artists, was “fantastic.”

Lish also noted that chefs are seeking out Community Skis for its “cook and tells.” Chef Ian Algeroen headlined the most recent event.

In fact, Algeroen (who formerly owned and operated Restaurant Skadi on Old Mammoth Road for 17 years) intends to open a restaurant next door to Community Skis in the former Mammoth Brewing Company location. Lish said that once Algeroen opens his doors, joining Community Skis and Laurel Stanford-Mannings’ Paisley Fine Art, Berner St. will become something of an arts and culture district.

Lish and Broumas are looking forward to the new addition, both for the community as a whole, and for the growing collective on Berner St.