The 21st High Sierra Fall Century (HSFC) road bike race will take place September 6 with the start/finish line at the Village at Mammoth. 1,500 riders are expected at the 2014 event and the Sheet surveyed several local road bikers as they train for the upcoming race.

Wynen, who rides his bike every month of the year said, “it’s a cross between training and enjoyment. It’s not so much training for the event but it’s just so fun to be on your bicycle on quiet roads with incredible views. It’s hard to beat.” 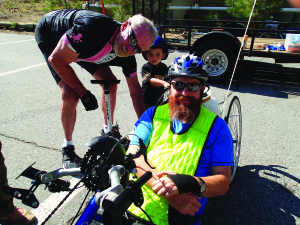 The HSFC “is particularly difficult because of the high elevation and elevation gain,” said Wynen, who will ride in his fourth HSFC this year. “On the way back you always have a headwind and it’s uphill. It’s one of the most difficult rides I’ve ever tried to do.”

Most riders agreed with Wynen including local Kathy Johnson, who said, “the hardest part is the wind the last 10 miles.”

Johnson, like Wynen, started road biking as cross training for mountain biking. Johnson, 55, has lived in Mammoth over 30 years and competed in the HSFC for the first time in 2013.

“I kept hearing how awesome [HSFC] was,” said Johnson, who bought a new bike last summer and decided to try the race. Unsure if she could finish, Johnson left her car at the lunch stop but was able to complete the course.

“It’s really fun. There’s good support. I ride it to be in the group and we do it for the camaraderie,” Johnson said. “When you do it with your friends, it doesn’t feel like 100 miles.”

Johnson averages 45-50 miles a couple of times a week and hopes to do a 70 or 80 mile ride before the race on September 6. “I don’t have a training program,” Johnson said. “I ride my bike. I know there is a method but I don’t have spare time.”

Mammoth local, Gracie Hammer, who will ride in the HSFC for the first time this year, agreed with Johnson.  “I’ve been trying to ride but it’s really hard to train as much as I am supposed to,” said Hammer, mother of three. “But I ride three times a week and I ride with people who push me.”

As part of her training, Hammer rode the cycling section of the Ironman relay at the June Lake Triathlon in July, finishing second. “I’ve been pushing myself,” Hammer said. “Five months ago, I didn’t think I could do it. But now I think can.”

Hammer, who grew up in the Eastern Sierra and has run most of the surrounding mountain passes, started cycling to change up her running routine and spend time with her parents, who will also ride in the HSFC. “Honestly, I didn’t think I’d like it,” she said. “But I fell in love with it. I fell in love with how far you can go and see so much of where we live in one day.”

Hammer, who describes herself as too competitive for her own good, will ride in the Gran Fondo timed race at the HSFC, a new addition to the event in 2013.  The Gran Fondo race, which follows the same course as the Century, has a pro-style start, timing chips, and published race results.

Wynen said locals ride the Gran Fondo “to see how they stand up to some of the best riders who might come up and do it,” he said. “ Because we are so remote, we’re kind of like the big fish in the small pond. But [the Gran Fondo] allows us, from an athletic standpoint, to test what we’ve got. The pond suddenly gets bigger for the weekend.”

“I like the time option. It makes it a little bit more competitive,” local Tim Standifer said. “But whenever you get a few bikes together it turns competitive.”

Standifer has been road biking for 30 years, competing in over 20 century bike rides including the Death Ride out of Markleeville which climbs 5 mountain passes.

Standifer said the only disadvantage to the HSFC is the altitude, unless of course you are local and then the elevation becomes an advantage—as is the remote location. He has ridden races through downtown areas of cities with traffic and stop lights, which  “takes the fun right out of it,” Stanaford said.

“Where we live, [road biking] is such an easy fit. We have great roads, not a lot of traffic, clean air and beautiful scenery,” Standifer said. “And it’s great exercise.”

Standifer started road biking after competing in several triathlons, realizing that cycling was his favorite out of the three sports. He usually does at least one 60 to 80 mile ride each week, sometimes even a 100 mile ride. “I probably ride 5 nights a week and 250 miles a week,” he said.

The 102-mile race is not the only option at the HSFC and many locals ride in the 70-mile and 42-mile races following different courses routes. Several athletes with disabilities compete, with support from Disabled Sports Eastern Sierra (DSES).

Nate Gratz, 40, born and raised in Bishop, rode his handcycle independently for the first time in June 2013. Before last year’s HSFC, “the furthest I had ridden was 9 miles. My goal was 15 and I made it 19.5,” Gratz said.

“Before my accident, I was more into hiking, hunting that sort of thing. I was an avid outdoorsman,” Gratz said. Three years ago Gratz broke his spine after hitting a sandbar while bodysurfing in Southern California. Now a quadriplegic, “cycling was the first thing since my accident that I am really able to do and enjoy.”

Gratz rides because “it gets me out of the chair— I’m in the chair or bed all the time. This way I can propel myself independently.”

Gratz trains once a week with DSES in addition to training out on Benton Crossing Road. “And I workout in my home gym every night,” he said. “I’ve ridden 20 miles twice this summer.”

Another Bishop local, Arlene Callahan, rode 25 miles in last year’s HSFC on her handcycle. “I wanted to challenge myself,” Callahan said. “I’m 53 years old and I wanted just to see how far I could go.” Callahan, who has spina bifida, rides around Bishop and trains with DSES once a week in addition to pushing her wheelchair “all over town.” Callahan enjoys riding her bike because “it’s challenging and it gets me outside,” Callahan said. “I’d tell [anyone] to try it. You’d be amazed at what you could do.”

Wynen agreed with Callahan saying that anyone could ride 30 miles “off the couch.” Plus he said, “There’s lots of stops along the way where there are really happy people to encourage you and to feed you,” Wynen said. “And then at the end there’s a huge meal and everyone is hanging out in the Village. That’s what cycling is about in my opinion, it’s more of a social sport.”

Mammoth Mountain is one of the biggest supporters of the event, creating the Gran Fondo race in 2013 and hosting the start/finish in the Village. Wynen praised the EastSide Velo Club and Mammoth Mountain, specifically Bill Cockroft, for “reigniting the passion of cycling in the Eastern Sierra.”

“The promoters now are making it a bigger event,” Johnson said about the Mountain’s involvement. “It’s more exciting and more desirable” to ride she concluded.

Standifer also supports changes the Mountain has made at the event, saying it has become great for families with more and more new riders signing up each year. “It’s fun to see people do it for the first time— it’s such a great achievement to see them finish something they never thought they could do or even want to do” he said “If anyone hasn’t done it, it’s a must do.”