At last Sunday’s closing performance of Sierra Classic Theatre’s summer production of “A [Mammoth] Midsummer Night’s Dream,” Lysander, played by Jim Marcotte, was wearing a shirt with a likeness of Dave McCoy on the front.

As McCoy turns 99 this Sunday, I drove down to see him this week and I asked him about the shirt.

Lunch: You get any royalties for that?”

McCoy [self-deprecatingly]: He must not know me (referring to Marcotte and his I <3 Dave shirt).

McCoy’s assistant Brandon Russell then pointed to a photograph on the wall – Dave, smiling broadly, his face speckled with dirt. The photograph from whence the t-shirt was made.

Russell: That photograph was taken at Motocross.

McCoy: I won that race.

Sheet: When was the photo taken?

“So Dave,” I say, changing the subject, “I heard this rumor that to celebrate your 100th, you’ve agreed to be Grand Marshal of Mammoth’s 4th of July Parade. Is this true?”

Dave’s eyes twinkle a little. He turns to Russell. “Did I say that?”

Russell, all sincerity, replies, “I think I’ve heard you say that.”

Dave feigned a grimace. His assistant had outed him. “Well, why not? I might do it.”

That night, I got home and watched a TED talk recommended to me by Scott McGuire. The talk was by Simon Sinek and entitled, “Start with Why.”

The theme of the talk was about how most people and corporations think from the outside in. Take the Town of Mammoth Lakes for example. In its vision statement, it talks about becoming a World Class Destination Resort. That’s the what. In Sinek’s model, the next step towards the center is the How, where you talk about all the strategies you’ll employ to create that resort. And finally, the innermost layer is the Why. But, of course, the Why is the tricky part, which is precisely why most people choose to answer it last. The fact is, most people can’t identify the Why, and if they try to identify the Why, they put it in the most superficial of terms. To be rich, or successful, or recognized, or important.

Which, if you’re part of such an organization, is about as inspiring as a pile of dogshit.

Dave McCoy never had any question, doubt or hesitation about the Why. Every time he sees me, he asks me his Why question within the first thirty seconds. 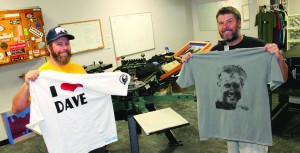 Mike Rousseau (left) and Jeff Posey displaying the Dave-inspired shirts they print at their Eastcore Productions studio on the first floor of the Sierra Center Mall. Photo courtesy: Sheet staff.

Because for Dave, the Why was having fun, working hard and caring for people. Everything else he built and achieved stemmed from the Why. His success was borne from thinking inside-out. Why, then How, then What.

Later that night, as if to drive home the point, my wife and I sat down and watched a documentary on Bob Marley we had received from Netflix. Again, I was hit over the head with the Why like a two-by-four. Marley’s Why: I want the world, regardless of color or creed, to love one another.

Which makes one start pondering the following. Is there any indication that Mammoth Mountain Ski Area or the Town of Mammoth Lakes knows the answer to its own Why questions?

If I were to answer for the Town, I would say, “We are a hardy community. We care about each other and our natural surroundings, and we want to share this special connection we have to this place and to our neighbors with the wider world.” That’s our why.

More about Dave shirt designers Rousseau and Posey. As Posey explained, “It’s the first shirt we’ve made custom, from our own design, rather than a commissioned product.”

The pair, east coast-bred hockey players who met while playing in Mammoth’s Men’s Hockey league (Rousseau: He nearly took my face off with a slap shot), have been open since February, 2013.

When Posey contacted Evan Russell at the Mammoth Lakes Foundatilon about getting rights to use Dave’s image, he was inspired to learn that because of Dave McCoy, all local kids have the opportunity to attend Cerro Coso for free.

Posey then offered to donate $4 from every Dave shirt he sells to the Mammoth Lakes Foundation.

Eastcore sells the shirts for $20 out of its storefront inside the Sierra Center Mall, 1st floor.

Final note: The Sheet and Black Velvet Coffee are teaming up to form the Black Velvet Sheets Dodgeball team. League play starts Sept. 3. You want to throw stuff at me – here’s your chance.