Racing 100 miles on a horse is a different animal.

On August 9, Mammoth resident Jennifer Langlo completed a singular century ride: the grueling Tevis Cup. For those who may not have heard of it, the Tevis Cup is the oldest modern day endurance horse ride, begun  in 1955 when Auburn banker and lumberman Wendell Robie rode the rugged terrain of the Western States Trail from Lake Tahoe to Auburn in less than 24 hours. His intent was to prove that modern horses were as tough as the Pony Express horses that once delivered mail between Saint Joseph, Missouri and Sacramento, California. Turns out, they are.

Since the 1950s, more than a hundred riders from all across the western states—and the world—have competed annually in the 24-hour, 100-mile endurance ride.

The ride has a less than 50 percent completion rate.

The Tevis Cup gives no cash prizes, only trophies for the fastest rider, and the soundest horse at the completion of the race.

Langlo said she was drawn to the Tevis Cup after buying a horse in 2005. “I was very green to horses, but I did have a little past experience with them from the ages of 13 to 16,” she said. “I always wanted to have another horse if and when the time was right, and in 2005, my son was graduating high school here in Mammoth and going to college, and I was financially stable.”

At the time, Langlo was a runner, and decided to purchase a horse good for endurance riding. “I’m not really a show/arena person,” she said. “I found out about endurance riding, and I liked the idea.” 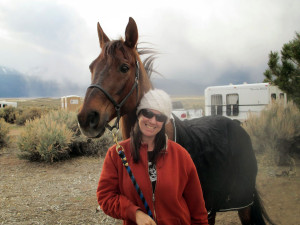 She bought Rio, a purebred Arabian recently retired from the racing track. As it turns out, Arabians excel at endurance. But Langlo had her work cut out for her; “The first six months [with Rio], it was psychological training,” she said. Although Rio was physically fit from running the track, he had never walked a trail before. “Just to get him to cross water, that was six months,” she laughed.

Langlo said she was fortunate enough to happen upon two local mentors who knew much more about training for endurance riding, and rides in the area, than she did. One of them was Dick Dawson, who lives in Benton and has participated in the Tevis Cup eight to ten times, Langlo said.

“Dick is in his eighties now,” she said. “He and his wife, Carolynn, who is also an endurance rider and has also completed Tevis, volunteer at one of the vet checks at Tevis every year.”

Tevis Cup has 11 vet checks, where the average 50-mile ride only has one to two; these checks ensure that the horse’s heart rate is not too high, as well as check for hydration, gut sounds, back soreness, and muscle tone. Vet checks also offer volunteers and riders’ crewmembers an opportunity to care for riders and their horses (Langlo’s husband, Peter, has been her crew member for all four Tevis Cups she’s competed in).

Dawson encouraged Langlo to sign up for a 30-mile ride in Bridgeport. Rio performed well enough that in 2007, after participating in 50-mile and multi-day rides, Langlo decided to give the Tevis Cup a try.

The ride begins at 5 a.m. just south of Truckee. “The first part is really remote and beautiful, up on a ridge in the Sierra,” Langlo said. But, “it is a technical, rocky part, and a lot of horses get pulled [from the ride] in that section.”

The second part of the ride is called the canyons, and has 28,000 feet of elevation change, Langlo said. “You get down in the canyons, and it’s 110 degrees,” she said. The heat and exposure accounts for most of the dropout rate.

The trail goes on to follow and cross the American River, and riders usually complete the final section in the dark, following glow-stick trail markers. After 24 hours of riding, a rider’s horse must still be fit to continue at the end of the race, Langlo said. If not, the rider will be pulled, even at the finish line.

“We finished in sixteenth place out of 190 starters that year,” she said.

Given this success, it was no surprise Langlo went back to try the Tevis Cup two years later (the 2008 Ride was canceled because of fire). But Rio was suffering from his first injury, and was pulled from the first third of the race.

In 2012, with Rio completely rehabilitated from his injury, Langlo attempted the Tevis Cup again. Although she successfully completed it, “I was just a pile,” she said. “I didn’t have fun. The last 30 miles, especially.”

Between 2009 and 2012, Langlo had changed careers, from office manager at Coldwell Banker to massage therapist at In Touch, and had stopped running.

“This year, I started going to the gym,” she said. While some might not realize the importance of a fit rider, Langlo noted that fitness improves both balance and stamina, not to mention helping with the portions of the trail where a rider must walk her horse to rest him.

“Your energy is going to affect your horse’s energy,” she said.

Further challenging Langlo’s fourth attempt at the Tevis Cup was a bad injury sustained by Rio just after the 2012 Cup. Rio got caught on barbed wire, tearing open one leg, and was out for a year and a half. Langlo had only eight months to get him, and herself, back in shape.

“We did our first endurance ride in January, out of Ridgecrest,” she said. “I’d never been so sore. I hadn’t ridden for a year and a half … The last 10 miles, I couldn’t even trot.”

A few rides later, and it was time for the Tevis Cup. Langlo said she was lucky to spend most of the ride in her own little bubble, alone on long portions of the trail. “My horse was just flying,” she said. “He was having as much fun as I was.”

Langlo’s training had paid off: “This year was the best ride ever,” she said. “For my horse to come back like this, he’s just a phenomenal athlete.”

Langlo said she was never in it for the prizes, although she and Rio have consistently placed well in endurance rides. Instead, she takes to heart the American Endurance Riding Conference motto: “To finish is to win.”

“There are people who race; who want to place well and win … and then there’s the rest of us,” she laughed.

The best moment of this year’s Tevis Cup: when Langlo and Rio pulled ahead of several other riders in the Granite Wilderness near Cougar Rock, a popular photo op spot on the ride.

“It was just me in the front, seeing this beautiful wilderness,” she said. “I had the biggest smile on my face.”